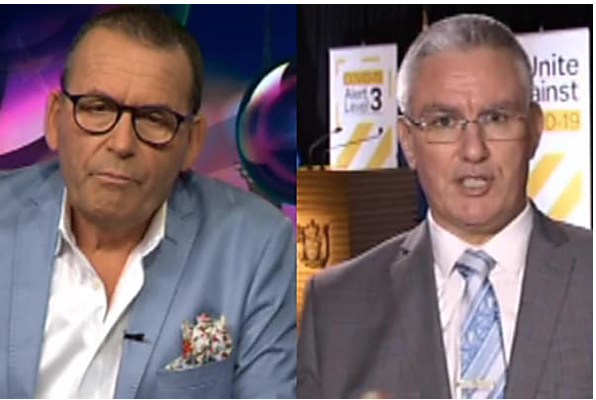 News Guru Mark Jennings has produced a great interview with Paul Henry over his month long stint on Rebuilding Paradise.

I’ve really enjoyed the 4 weeks of his show.

You forgot how genuinely talented Henry is and also that he understands the enormity of what we have just faced with the pandemic lockdown and the post-reality of that.

His attempts to get some answers to serious questions has been light years ahead of anything Seven Sharp or The Project managed to achieve.

There have been real highlights from Paul’s 4 weeks on air, my personal favourite was the Kelvin Davis interview where you sat the entire 10minutes hoping Kelvin didn’t self implode, it was like a rollercoaster with a switched on blender in your lap.

You ended up being too frightened to move.

Kelvin is a lovely bloke and is very intelligent and personable. He’s great at live public speaking, but the second you switch a camera on him he becomes a trainwreck. A younger meaner Paul Henry would have spent the full ten minutes torturing him, the older wiser Paul Henry let Kelvin do it to himself.

On reflection Henry tells Jennings that he has found the lack of intellectual curiosity an embarrassment but to be fair on everyone else, our institutions are still in shock from the enormous impact of this plague.

What would have been more interesting was instead of asking the questions, Paul was actually challenging authority figures with his own researched solutions because clearly no one in power had any.

If ‘Rebuilding Paradise’ comes back it should be renamed ‘Setting the Agenda’.

In terms of coming back, it’s a relief to see he’s still open to replacing The Project and Mediaworks would be wise to seriously consider it. The Project costs a fortune and its mix of The Edge Radio Breakfast Crew intellect with The ZM Radio Breakfast Madhouse guffaw factory attempts at humour work when New Zealand is in a culturally benign environment.

You know, when no one actually gives a shit because things are fine.

However, we are no longer in a culturally benign environment, in fact there has been a seismic shift of the threat threshold which places NZ in a deeply insecure place. Punters at 7pm won’t be tuning in to TV3 for limp infotainment and shallow analysis, they will want TV3 for authority at a time when they are feeling frightened.

The entire psychosomatic broadcasting culture has changed in a month and that’s before the economic depression kicks in.

Mediaworks should sense the sea change in temperament.

One criticism of  Jennings however is this line…

Apart from Q & A on One, Rebuilding Paradise has been the only serious interview show anywhere near a prime-time slot in recent years.

…well actually Māori TV and Māori media have been staunchly putting serious current affairs into prime time slots. I know this because I’ve worked producing, researching and appearing on some of those shows like Waatea 5th Estate which played 7pm weeknights on Sky TV.

Māori take current affairs seriously because the reality of power demands it, when you live the grim reality of capitalism, you are far more attuned to the structure of its power. This is the sea change the wider NZ community is about to embark upon.

Te Ao with MOANA screens on Māori TV 8pm Mondays and has interviewed as wide a range of opinions as Rebuilding Paradise did and if Jennings or Henry had been watching that they would have seen Māori communities forging solutions as they went.

That criticism aside, Rebuilding Paradise might rebuild TV current affairs.