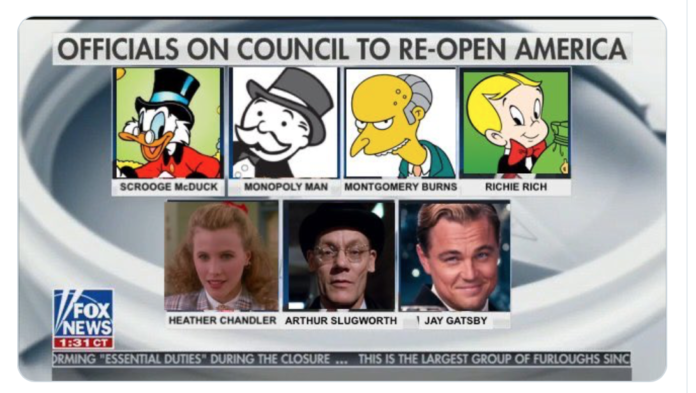 The Death Cult Capitalists bray that we must get back to work, regardless of the human cost in life, because their blessed free market economy is dying.

Let’s put aside the moral obscenity of their herd immunity blood sacrifice on the alter of Milton Friedman.

Let’s ignore the fact that we aren’t going back to ‘normal’ and that we are in economic survival mode for 18months until the vaccine is available.

Let’s put aside whether we are even sure you gain long lasting immunity from this little understood novel virus.

Let’s just look at their total belief that lifting restrictions will suddenly kickstart the economy.

Are people after an unprecedented and emotionally shocking event suddenly going to simply pop out to the shops and start spending like good little consumers?

You don’t think that a deep sense of caution will exist, that the very second a flare up occurs and starts to break out that people won’t panic buy the basics and flee back to their homes?

People are frightened, there is an invisible illness that permeates in public that will probably not hurt you but might kill you or your family if you pass it to them and it spreads like catholic rabbits breeding.

There isn’t going to be a returning to normal, even under the best case scenario we are at level 3 or 2 for months at a time with the occasional shut down and heavy handed quarantining, testing and tracing programs with no tourism other than returning citizens until a vaccine is available.

What is it about all of this that is so difficult for people to comprehend?

This once in a century unprecedented event won’t be solved by Lunchtime and expecting shell shocked citizens to morph into spending spree consumers just seems delusional in the extreme.