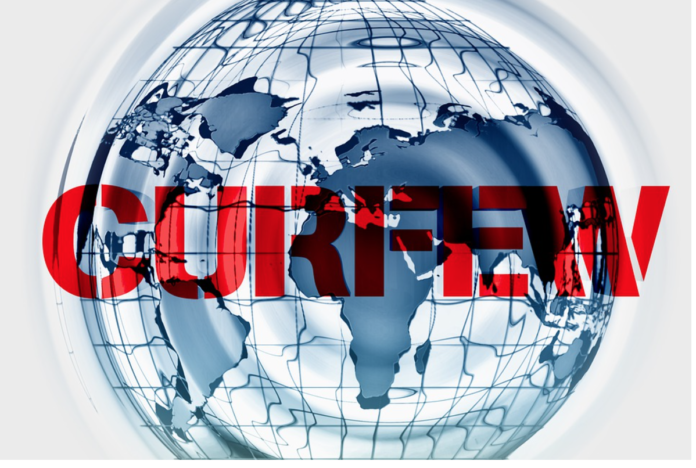 Nineteen new cases – that’s the good news. (But only if the low testing numbers over Easter have not skewed the results downwards.)

Another death – the not-so-good news we all dreaded.

The daily 1pm pressers have become a quasi pandemic lotto announcement. We await new figures with all the morbid fascination of driving slowly past a car crash, and trying to make sense of the mangled metal wrecks.

Tomorrow will be a return to a normal (or what passes for “normal” these days) and the next few days will confirm if the down trend is an accurate reflection of what’s happening – or simply the result of a long weekend.

Meanwhile the roads continue to be near-deserted and the streets equally vacant. Coming home tonight, I played “Alargo: Central Plateau“, a haunting piece of music from New Zealand musicians Kingsley Melhuish and Alan Brown. An apt piece to play, driving home in the dark, streets emptied of vehicles and people by an enemy we cannot see, hear, or touch.

An acquaintance told me she’s  come to appreciate the lock-down. It has made her life simpler, taking her back to her childhood when things weren’t as commercialised and hectic as they were nearly three weeks ago. I recall the world we used to live in pre-1984; shops open five days a week; city streets near-empty; shops closed in the weekend except Dairies, petrol stations,  and movie theatres. Now we don’t even have the movie theatres (though super markets have slipped through the time warp).

And it’s true. Wellington under lock-down is pretty much as I recall Saturdays and Sundays before the advent of almost non-stop retail activity.

In the suburbs, families with kiddies barely able to ride their trikes or scooters have reclaimed the near empty roads. They literally have become family-friendly. That’s a good thing – right?

Also the quietness. Few trucks. Airplanes are rarely in the sky. There are moments when there is nothing except the rustling of trees or birdlife or a dog. And when you do pass people out for a walk – despite the two metre “social distancing”, we’re actually looking at each other and sharing that secret “we’re-in-this-together” knowing smile.

Covid19 has given us a glimpse of what living could be if we just slowed down a bit; if we hadn’t exchanged a less frenetic life for the dubious “freedom” to shop-till-we-drop.

Commentators have suggested that the human race’s momentary “pause” might give us all an opportunity to re-think our values and the kind of world we want to live in. I doubt that. The moment humanity is able to get back on the treadmill, it will do so – and sadly at a faster pace. The frentic, commercialised life we’ve been living has been like a drug; too alluring to give up easily. We may’ve had to temporarily give up our “fix”, but our “dealers” will be back once the dust has settled…

On a relatively positive note, the government has leased nearly a thousand motel unit to house the homeless during the lock-down;

Minister for Housing Megan Woods said nearly 500 units were already filled and each unit could contain one person or a family.

“As of Thursday evening, 962 motel units in 15 towns and cities across New Zealand had been secured and made available, and 496 units already have homeless and vulnerable people living in them,” she said.

She praised the various community groups for their dedication and speed.

“In the last two weeks, there has been a massive effort to connect people who are homeless and living rough, with accommodation and social services.

“Many have been living on the streets or in unsuitable places where social distancing was not possible.”

But as Piki Martini – homeless for eighteen months – sadly revealed;

“We’ve been living in a car and a tent before here. It’s just quite sad that now everyone wants to worry about the homeless when this Covid-19 has come in, before then we were just everywhere.”

She has a point. Despite this government’s best (?) efforts, homelessness and over-crowding continues to be a blight on our society. It is troubling that the wheels-of-the-State move faster only when those Who Have may be threatened by Those Who Have Not, as potential disease-carriers.

Meanwhile,  National’s housing spokesperson Simon O’Connor, raised the same question: what happens after the pandemic is no longer a pressing crisis?

Unfortunately (for him) his faux-concern was little more than jaw-dropping, eye-ball rolling, stomach-turning hypocrisy;

“There’s a risk here that just if you house the homeless, in a few weeks or months time, the government makes them homeless again.” – Simon O’Connor, National Party Housing Spokesperson, 12 April 2020

Let me just ‘put it out there’ that National should be the last to lecture us on homelessness. From 2008 until their admission of a “housing challenge“in 2016, National did nothing except open the floodgates to immigration, putting pressure on existing housing stock; reduce State housing by 7,400 units, and buy motels to put a roof over the heads of desperate families.

Mr O’Connor would do well to keep his head down. He and his former inept government exacerbated an ongoing housing crisis that will take a decade to fix.

His hypocrisy is unhelpful, to put it politely. Or if that doesn’t work, less politely.

Meanwhile, today, our Prime Minister – the Leader the rest of the world would dearly love to have as their own – continued to raise our spirits; keep hope alive; and admonish (like naughty children who’ve been pinching from the biscuit-jar) those who’ve been flouting the rules. As she rightly reminded us all, every time someone flouts the rules, the risk of transmission increases. And the risk of death to highly vulnerable people is made much worse.

As Ms Ardern reminded errant “children” for the umpteenth time, “it took just one case to spread among others“.

This evening, after coming home; stringently washing my hands, I made a light snack for myself. Indulged in eating too many feijoas from my tree, and Skyped my partner. Or rather, I could see her, but not vice versa. My camera? Skype itself? Gremlins in the system?

I teased her about her knitted beanie;

“It reminds me of Ena Sharples, from ‘Coronation Street.”

She promptly fired back;

Humour. In lieu of a vaccine, it’ll have to do as our “best medicine”. 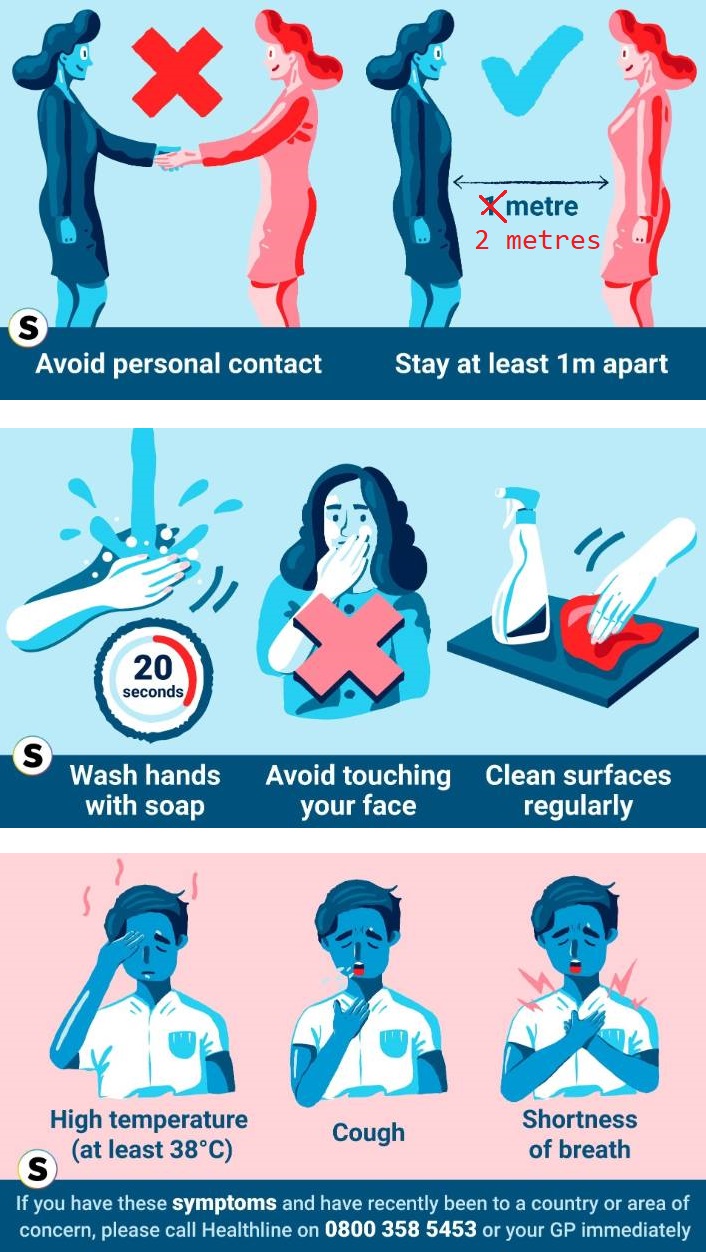 Noted/North & South:  The economics of immigration in NZ 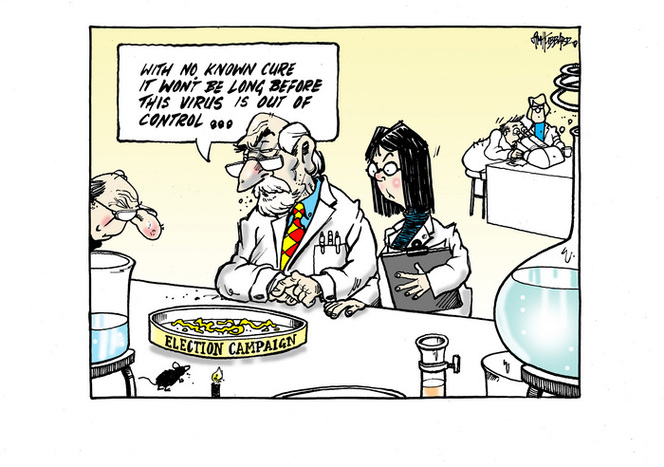