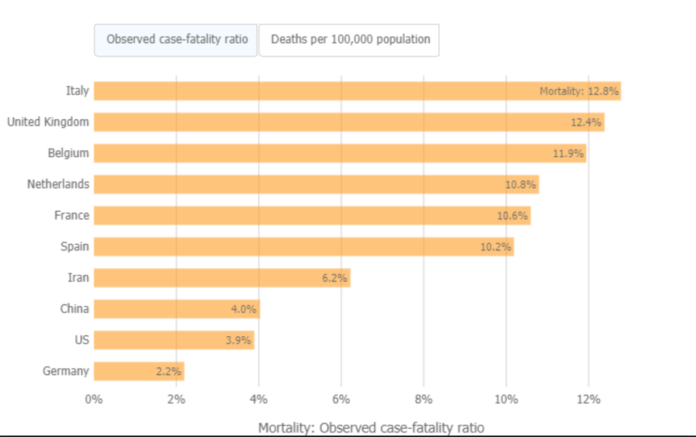 Right at the beginning of the pandemic, just six weeks ago, I wrote about the potential for a disastrous world death rate.  If the virus is as infectious as the flu, or even more so, I thought, then 3 billion people might get it. If the death rate, as mooted then, was 2%, then 60 million people may die.

This was before alert levels, mitigation strategies and lockdowns.  We have shown that, as human beings, we do not have to be the passive recipients of whatever the virus brings us. I had no idea, at the time of writing, that we could so quickly reorganise our society to prevent the spread of the infection.

But I do want to revisit my assumption of a 2% fatality rate. On known figures, this rate, measured as the number of dead as a proportion of number of infections, varies dramatically between countries.  Here in New Zealand it is currently .35 of a percent, although ;likely to rise to around 1%. In Italy, 12.8% of people infected with the virus have died.

The United Kingdom, with its excellent public health care system, is nonetheless experiencing a current fatality rate of 12.4% which is extremely high.  On the other hand, the USA is running at a rate of around 3.9%, which is around the same rate as China reported.

Of cours,e there is something fishy going on to get such differences. Possible explanations include:

I don’t know what the answer is, but the chart at the top of this blog (from the excellent Johns Hopkins site) shows that six European countries have by far the highest fatality rates. A race that no-one wants to win. I am sure this will have all the epidemiologists out in force, trying to work out what is happening.

From our perspective in New Zealand, we should just be grateful that we are here and not there. Things are not good in the UK.  Issues of huge fear among the elderly, food security and supply, political infighting over the response to Covid 19 (complete with shady right wing organisations modelling herd immunity scenarios), lack of places to exercise and confusing leadership with leaders spouting on about wars when they should be alleviating the burdens.  My English sister continues to celebrate being here.

The Guardian today has listed little stories about 80 victims of Covid 19, many of the health workers, bus drivers and care workers.  And Tim Brooke-Taylor, a very funny man. They are worth reading in full. 80 out of over 10,000.

I am still hopeful that Boris has come out from his near death experience a better man.  Today he thanked two nurses, including “Jenny from Invercargill” who he credited with saving him. Is his life now on a new, redemptive path?

Keep yourselves safe and well and be kind.