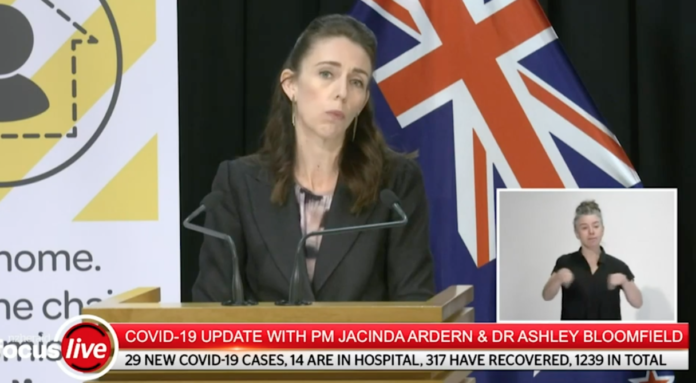 Today’s incredible results of only 29 cases is testament to the bold tenacity of Jacinda to go early and go hard on this virus.

There are certainly areas where we can be critical in terms of when border restrictions were put in place and the use of self isolation, but the numbers speak for themselves and we have Jacinda’s leadership to thank for that.

Incubation time of the virus is 14 days, but there are cases where it has been 19 days and 27 days, so we went into lockdown on Wednesday 25th meaning the majority of infections will appear by April 8th in the second week of the 4 week lockdown, but we need to KNOW the damned virus has been completely eradicated, so that takes us out to April 21st for the last possible incubation date and we would need at least 2 weeks of no new infections to know the sacrifice had been worth it.

…but the remarkable numbers we are seeing today could rejig that math and we might be free of this plague by the end of the 4th week.

While the decision to lift the lockdown must be directed by public health concerns and the science, there are political ramifications as well.

If the numbers continue to decline, here are the possible political considerations.

If the rate has slumped to nothing, the Government can claim success and regain the trust of the electorate. It will be seen as a huge public health victory but will need to be tightly managed with closed borders, mass testing, mass tracing and strict quarantine measures until a vaccine is available.

Possible danger is that if the virus flairs up again, Government will be blamed for coming out too soon.

To be on the safe side, the Government extends lock down to gain extra time to put into place the larger infrastructure needed for closed borders, mass testing, mass tracing and strict quarantine measures. Faces criticism from Business groups as the pressures of the economic consequences of this start becoming apparent.

Stamps the disease out completely but faces enormous criticism from the Right on the economic damage caused. Could derail election and lose sight of the public health protections.

IF the numbers keep declining 5 weeks would be the smart money, but whether it’s 4, 5 or 6 weeks of lockdown, the economy we go back to will be truncated and forever in a sense of immediate retraction if the virus flairs up anywhere.

We won’t get anywhere near normal until a vaccine is ready, and that is 12-18months away.