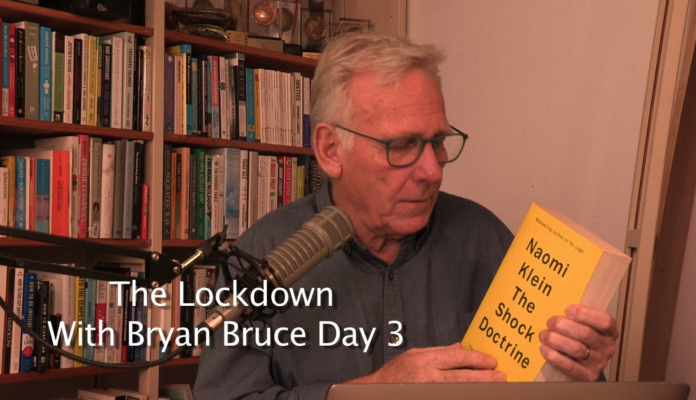 Today on The Lockdown I briefly introduce a video by the brilliant Canadian author and activist Naomi Klein.

In 2007 Klein released “The Shock Doctrine” in which she revealed the process whereby financial elites and right wing governments use moments of crisis ,such as natural disasters, to spread the politics and economics of selfishness that we know as Neoliberalism in order to increase their wealth and power..

A few days ago she released a video on The Intercept website in which she talks about how the Disaster Capitalism of Coronavirus would see the same flow of public money go to giant corporations and banks ,just as saw during the 2008 financial crash.

We need to recognise this script as one we have seen before and be ready with our own new script that puts people before profits.

Although her” Coronavirus Capitalism – And How To Beat It ” message is only 8 minutes long and about half of it deals talks about the situation in the USA today. However it is well worth sticking with it because she talks about solutions – like the Green New Deal that would work in our own country.