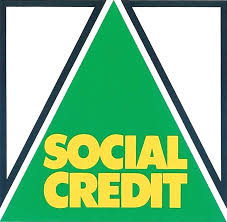 In May last year Treasury suggested the government and the Reserve Bank might have to consider ‘unconventional tools’ like Quantitative Easing and helicopter money, both of which are similar to Social Credit economic ideas.

The Reserve Bank this week announced that it was preparing to undertake QE, and today on National Radio, economic commentator and Newsroom Pro editor Bernard Hickey claimed the government needed to introduce a modified version of helicopter money – a Universal Basic Income, similar to National Superannuation, for all citizens.

Social Credit terms its concept a national dividend – under normal circumstances a payment to every citizen to replace income lost by the advancement of computerised workplaces and artificial intelligence (driverless taxis, robots as carers, automated factories).

Under today’s extreme circumstances it could be used, as Bernard Hickey recommends, as a short term measure to replace income lost through job losses, workplace closures, and business failures, ensuring that people have money to put food on the table, pay their bills, and keep the economy ticking over, to avert an even worse economic collapse.

The European Central Bank has just announced it will be doing $750 billion Euros of QE immediately, buying government bonds from banks and pension funds.

Our Reserve Bank could go one step further and purchase newly issued government bonds directly, rather than existing bonds from banks, to provide the government with a source of debt-free, zero-interest money at no cost to taxpayers to fund a basic income as part of the economic rescue package.

Using that method, taxpayers will not have to pick up the long term tab for billions in interest payments and the repayment of the debt which under standard QE simply provides bigger profits for the overseas shareholders of banks and other financial institutions.

The Commonwealth Bank (Australia’s central bank at the time) supplied the Australian government with funding for major infrastructure development.

The first Labour government financed the building of thousands of state houses with Reserve Bank money.

Social Credit’s economic policies are now in demand, and we’re ready to assist the government in its efforts to help New Zealanders through the current crisis and to build a better long term future for Kiwis.