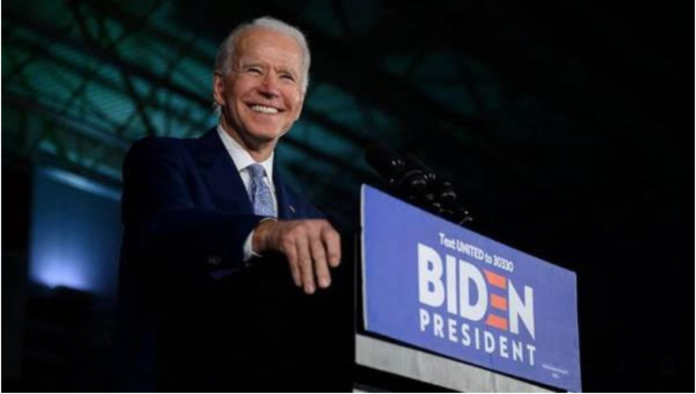 WATCHING THE SLOW descent of Bernie Sander’s campaign is a depressing reminder of democratic (and Democratic) political realities. The most brutal of these is that Newton’s Third Law of Motion applies with equal force to politics as it does to physics. “For every action, there is an equal and opposite reaction.”

Call yourself a “democratic socialist” and everyone who feels threatened by democratic-socialism will mobilise against you. The anti-Sanders mobilisation has taken some time to resolve itself into a single challenger, but former Vice-President Joe Biden’s, runaway victory in South Carolina has finally cleared the centrists’ path to the nomination.

No matter how thrilling Sanders’ wins in Iowa, New Hampshire and Nevada may have been, the brute arithmetic of the primary process remained constant: the combined strength of his opponents was always greater than his own. As the captains and the kings of the Democratic Party centre depart, with Pete Buttigieg leading the way this afternoon (2 March 2020) the inevitability of a single opponent standing athwart Bernie’s path to the nomination is now clear.

“Super Tuesday” (Wednesday, 4 March NZT) will winnow the field with even more force than South Carolina. The departure of Amy Klobuchar and (probably) Mike Bloomberg, will leave the field clear for Biden’s folksy homilies. Elizabeth Warren will likely remain in the race, drawing votes from Sanders in expectation of being rewarded with the Vice-Presidential nomination. At some point well short of the Democratic Party Convention in Milwaukee (July 13-16) Sanders’ campaign will falter and fade away. Many on the left of the Democratic Party will settle for the half-loaf that is Biden-Warren – especially if it means driving Donald Trump from the White House.

“No! No! No!”, the Sandernistas will cry. “That must not be allowed to happen!” But the angry protests of these young, idealistic progressives will not avail them. At some point in electoral politics, the moment comes when you must remove your fingers from your ears, open your eyes, and take in the terrifying spectacle of your enemies’ tanks rolling towards you. Whether you believe in it or not, the Third Law of Political Motion is very, very real.

Why is the Democratic Party leadership so terrified of Sanders becoming the nominee? Because they know the size and ferocity of the forces his nomination for the Presidency would unleash. Sanders supporters rail against the Democratic establishment – accusing them of doing everything within their power to undermine their candidate. And that’s true. They are. Not because they’re against Medicare For All, or even the Green New Deal, but because the billionaires Bernie denounces, whose enormous power and wealth are directly threatened by his policies, will move heaven and earth to keep him, and them, out of the White House.

Democratic Party stalwarts, the people who have spent years navigating the treacherous waters of the United States’ political system, have priorities very different from Sanders’ most vociferous supporters. They are only too aware that even if, by some miracle, Bernie won the White House; the Almighty is most unlikely to add a second miracle to the mix.

Yes, a President Bernie Sanders could achieve some important gains by Executive Order, but he couldn’t deliver Medicare For All, or a Green New Deal, or the writing-off of student debt, or any of the other radical measures he is promising, without solid majorities in both the House of Representative and the Senate. Truth to tell, securing the passage of such radical legislation would be a long shot even with substantial majorities in both houses of Congress. Without them, however, Bernie’s programme is a pipe-dream. As unrealistic as expecting the God of History to deliver the Democratic Party not one, but two, political miracles at the 2020 elections.

Stripping away all the ideological bunting, there is only one unequivocally popular prospect the Democratic Party can hold out to the American electorate: a White House cleansed of Donald Trump and all his evil brood. But, bringing together an electoral coalition powerful enough to secure Trump’s defeat in the Electoral College will not be easy. Far from offering voters the bitter rhetoric of class war, the Democratic Party’s candidate will need to speak the language of inclusion, reconciliation and national renewal.

The sentiments of America’s Founding Fathers should be turned against the constitutionally illiterate Republican incumbent. Recalling for voters all the great and redemptive moments of American history, the Candidate should then invite them to contrast the moral strength of America’s best leaders with the abject moral squalor of its worst.

Bernie Sanders and his followers have done the United States the inestimable service of bringing together all the planks necessary to construct the most progressive Democratic Party platform in a generation. To implement the Sandernistas’ progressive dreams, however, the voters of United States must first be persuaded to abandon the ruin of unreasoning and mutually destructive partisanship. First and foremost, America needs a healer.

If History has taught us anything, it is that revolutions inevitably open up new wounds – even in those rare instances when they succeed in closing up old ones. Always, the true believers cry: “Let Justice be done – though the heavens fall!” But what sort of justice has ever emerged from the ruins of paradise?

Let the equal and opposite reaction to Donald Trump’s hate be love. Allow him to initiate the action that will bring him down. The Democratic Party can only win in November by being the response – not the call.