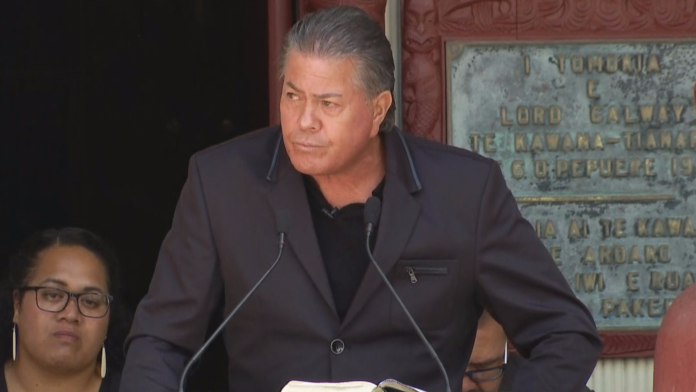 Brian Tamaki’s supporters cheered as the Destiny Church leader delivered a speech at Waitangi where he described immigrants as “parasites” and said Māori and Pākehā are becoming refugees in New Zealand.

Tamaki blasted the Government for “selling off the country” to foreign powers – making multiple references to China – and said it’s time to take New Zealand back.

“The Labour Government has been the worst selling off land,” Tamaki, described in the Waitangi Day service schedule booklet as an ‘Apostle Bishop’, said. “China is taking control of our water.”

…while Wuhan Virus racism is metastasising…

“In Albany, a woman came into the (swimming) centre and said…’why aren’t you banning all these Asians from the pool?'”

…the ignorance in believing the virus is loose in NZ is a failure of public broadcasting.

But there is something else deeper at play here than garden variety bigotry and a total lack of basic general knowledge..

The first is the genuine fear generated by the Chinese regime’s obtuse and deceitful manner in which it has hidden the true extent of this virus. Put this manipulation alongside their brutal repression of the Muslims, their harvesting of body organs from political dissidents and their mass surveillance Orwellian nightmare and a jaded cynicism towards anything China has to say is a very legitimate response.

New Zealand is founded on a sin, that sin is the mass theft of indigenous land without any intention of ever paying anything more than a pittance in reparation. We are a nation founded on exploitation and that exploitation continues at pace.

These three things all put enormous pressure on the social and public infrastructure from roads to public transport to housing. It is that pressure that the domestic population feels and despises and that fuels anger and bigotry towards anyone who is seen as an outsider.

But surely, if NZers wanted to be righteous in their anger, they would look no further than the mirror to be outraged?

The middle classes have collectively built an unjust and rigged game of property speculation that continually needs inflated demand from outside of NZ to keep their speculative portfolios inflated. We need international students to exploit, we need migrant workers to exploit, and we need over tourism to keep this manipulation afloat.

If we are going to get angry at the exploitation of NZ, let’s start by recognising who the real enemy is, the exploiters, not the exploited.

The good news is that the climate crisis and its catastrophic speed will force changes in NZ whether we like it or not.

3. Ecosystems & most human society will crash if we hit 3.5°C rapidly

Change is coming brothers and sisters, but if you are one of the exploiters, you just won’t like that change.