The danger of the impeachment was always that it if it failed Trump would hold it up and use it as vindication.

The only chance Impeachment had of winning was if Bolton was allowed to testify, but the Republicans outrageously killed that off.

US President Donald Trump declared the actions against him as “bullshit” in an extraordinary address from the White House after being cleared of impeachment.

Trump said the “witch hunt” started the day he and the First Lady arrived at the White House “and it never really stopped”.

“This should never happen to another President. Ever.

He said his accusers had ruined lives. “People went bankrupt after people lost all their money.

“I came to Washington to… help. Bright-eyed and busy-tailed.”

Trump said his enemies had been “nasty” all the way through his election campaign. “We thought it would stop after the election. Little did we know we were running against some bad and evil people.”

Trump said the allegations against him should have been cleared up in a day but it had taken years. He said the address wasn’t a news conference or a speech, it was “a celebration”.

Trump, speaking to a room full of supporters and streamed live, declared the impeachment proceedings a “disgrace” and complained anew that it was “a very unfair situation,” echoing his broadsides hours earlier that stunned the crowd at an annual prayer breakfast.

“It was evil, it was corrupt,” Trump declared. “We went through hell, unfairly. We did nothing wrong,” he continued.

As Trump spoke, nearly every inch of the White House’s East Room was packed with supporters. Among them: Republican senators who cast some of the votes to acquit him, Majority Leader Mitch McConnell and Rep. Chuck Grassley, several Cabinet members, including Attorney General William Barr and Treasury Secretary Steve Mnuchin, and staunch House allies including Reps. Jim Jordan, Devin Nunes and Minority Leader Kevin McCarthy.

Earlier, Trump unleashed his fury against those who tried to remove him from office, a day after his acquittal by the Senate in his impeachment trial.

Speaking from a stage where he was joined by congressional leaders, including Democratic House Speaker Nancy Pelosi, who led the impeachment charge against him, Trump shattered the usual veneer of bipartisanship at the National Prayer Breakfast in Washington.

“As everybody knows, my family, our great country and your President have been put through a terrible ordeal by some very dishonest and corrupt people,” Trump said at the annual event.

His airing of grievances came hours before he was to deliver a full response to the impeachment vote at the White House surrounded by supporters.

“They have done everything possible to destroy us and by so doing very badly hurt our nation,” said Trump, who triumphantly held up copies of two newspapers with banner ACQUITTED headlines as he took the stage.

His remarks were especially jarring and whiplash-inducing coming after a series of scripture-quoting speeches, including a keynote address by Arthur Brooks, a Harvard professor and president of a conservative think tank, who had bemoaned a “crisis of contempt and polarisation” in the nation and urged those gathered to “love your enemies”.

“I don’t know if I agree with you,” Trump said as he took the microphone, and then he proceeded to demonstrate it.

…this is toxic masculinity at its most malicious and Trump at his most sociopathic.

It is raw, it is naked, it is hatred at its most uncivil and it will probably propel him to another victory at the end of this year.

Social media has allowed white men who might have been previously open to progressive politics to feel angry, alienated and resentful. Trump understands the politics of resentment as well as Adolf Hitler did and Trump will whip that resentment into political spite.

In a cultural and political landscape dominated by identity politics, our inability to find common cause with each other, to build universal values and agreed truths has imploded under the weight of an ocean of cacophony all screaming wounded personal maxims into a void of subjective rage.

The delineation of power in a capitalist society is NOT identity, it is class. It is the 1% + their 9% enablers vs the 90% rest of us. If we refuse to engage in politics beyond our skin colour, genitalia and sexual orientation we will never find the solidarity to build the better unified future all human beings yearn for. 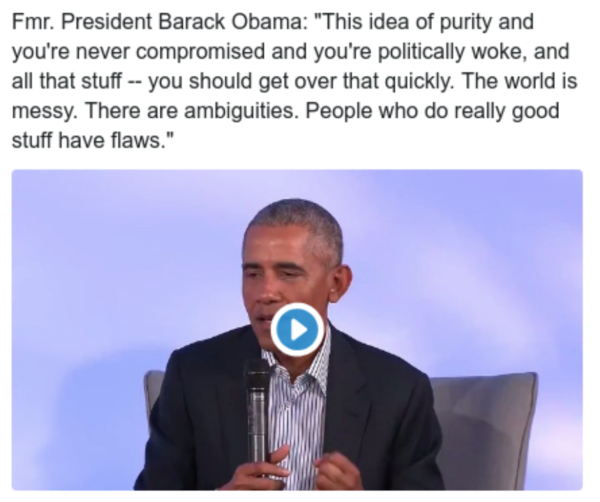 If as a woke activist your staring point is that all men are rapists, all white people racist and anyone standing up for free speech a Nazi, you might want to consider if you are simply providing hate merchants like Trump the ammunition he uses

Trump shows us he will utilise resentment for personal advantage in a way that makes micro aggression policing look like the alienating middle class fad it is.

Be afraid Brothers and Sisters, be very afraid.