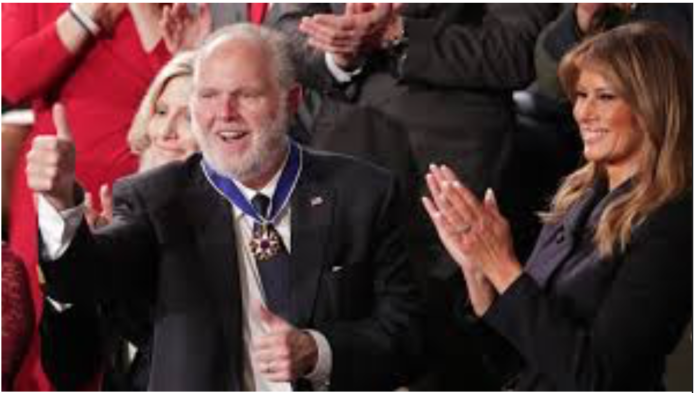 Trump’s shamefully jingoistic State of the Union address had too many appalling examples of intellectual and philosophically bankrupt hatred to list but surely the moment that should shock every New Zealander was Trump’s astonishing decision to hand Right Wing Hate monger, Rush Limbaugh, the fucking Presidential Medal of Freedom!!!

He has just been diagnosed with late stage lung cancer, (personally I’m cheering for the cancer) and he is the far right radio host who claimed that the Christchurch atrocity was a fucking “false flag” leftist attack…

“There’s an ongoing theory that the shooter himself may in fact be a leftist who writes the manifesto and then goes out and performs the deed purposely to smear his political enemies, knowing he’s going to get shot in the process,” opined Limbaugh, without providing any evidence for his remarks or even a source for these claims. “You know you just can’t — you can’t immediately discount this. The left is this insane, they are this crazy. And then if that’s exactly what the guy is trying to do then he’s hit a home run, because right there on Fox News: ‘Shooter is an admitted white nationalist who hates immigrants.'”

…giving a psychopath claiming the Christchurch atrocity was somehow a leftist false flag the fucking Presidential Medal of Freedom is a slap in the face to those who died, those wounded, the first responders, the people of Christchurch and the people of NZ!

The American ambassador should be dragged into Winston Peters Office and read the riot act on how utterly offensive this is to New Zealanders.

Trump’s unique brand of malicious spite has managed to find a new low.