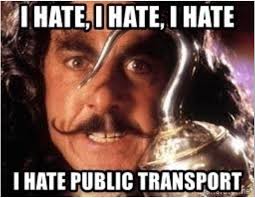 There are times I dream that John Tamihere had won the Auckland Mayoralty and the first thing he does on day one is sack all the Executives at Auckland Transport.

I despise Auckland Transport. I have been a patient and frustrated user of public transport in this city my entire life, and the joke service provided over the decades has left me bitter and angry at their never ending substandard incompetence.

Finding out last month that they now want to kill off the Outer Link (which is the only way public transport users can get from different sides of the city) and informing Aucklanders that my bloody train station will be out of operation FOR 4 FUCKING YEARS have been recent highlights in my desire for their public floggings.

I moved to where I am because it has the train station down the road, my daughter was going to use it when she went to Intermediate School, but then on top of all the disruption this bloody CRL is causing, it now turns out my train station will be closed for four bloody years!

My daughter will be out of Intermediate School before it’s functional again! The thing that pisses me off most about the CRL is that by the time it does get completed, it will probably hit immediate capacity.

That’s right, all this heart ache, all this disruption for infrastructure that will hit capacity shortly after it opens.

The only miracle is that Auckland public transport is not as shit as the Wellington buses.

So what does a company taking monopoly rentals from a transport system decide to do right when the climate is in crisis? Why they raise the fares in a move that will penalise the poorest and see half a million fewer bus trips.

We need to have a publicly owned public transport network that is free to use. No other measure will get Aucklanders out of their cars and return a social and environmental equity quite like free public transport.

A truly progressive political party that wants to do something meaningful for the environment would nationalise the public transport system overnight.

The climate crisis is only getting hotter and more dangerous, investment into mass public transport is going to be the only way forward, the time for getting messed around by a private company clipping the ticket on an essential infrastructure is over.

Nationalise all public transport and start running it like the essential service it is, and for the love of Christ, don’t let Phil Twyford near it.