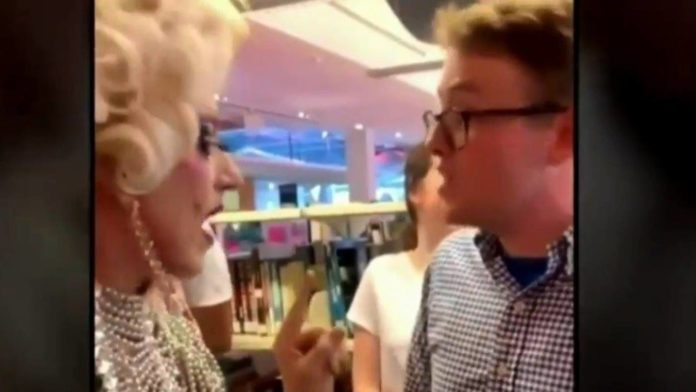 I think it is beautiful that Drag Queens read to kids at libraries, it is a lovely way to promote diversity and empathy and bring down walls.

I disagreed with the right wing protestors who aggressively protested a Drag Queen reading event in Australia this week as petty and unacceptable in that it frighted the children present and that can never be ok as political activism.

I didn’t jump in on the social media outrage and lynch mob bandwagon that erupted because giving someone that petty any oxygen is more than their bitterness deserves.

With his thumbs in his pockets, Wilson Gavin stood at the front of the crowd, leading a videotaped chant that would quickly go viral: “Drag queens are not for kids.”

As the president of a conservative group at his Australian university, the 21-year-old had steered protesters into a public library in Brisbane, where they barged into a room full of families attending “Drag Queen Story Time.”

Inside, the group faced off with a sequined, costumed performer who had been reading from a children’s book.

Kids in the audience asked what was happening. Parents called the police, and a handful filmed the confrontation. As their videos spread across social media, politicians chimed in – most of them condemning the protest as a hateful act.

The next day, Gavin, who was openly gay, took his own life.

…this tragic episode has the intersectionist Identity Politics woke tied in knots trying to work out who they should cancel and deplatform first.

A lot of scrubbing of woke Twitter accounts last night in NZ as those so gleeful to join the original mob lynching quietly deleted their timelines in remorse and shame.

Twitter is an ocean of the bullied who have finally found strength online and that taste of power is too addictive to ever leave. In a post #MeToo world where allegation is the new evidential threshold, virtue signalling subjective rage is almost as important as the constant sadfishing olympics where wounds and scars are held up to the foaming public demanding attention.

As politics polarises around identity and not class solidarity, tribal micro-aggression policing is only going to get more puritanical on social media because those who need this vehicle gain too much emotionally from its self-aggrandising algorithms.

Public shaming is not a new phenomenon by any stretch, but as Russell Blackford, a writer, philosopher and lecturer at the University of Newcastle explained, civilisations moved away from it “partly in recognition of its cruelty”.

The explosion in growth of social media platforms over the past decade has seen its return, but Blackford describes it as a very new form of shaming.

“These types of mobs are just devastating for people and I don’t think those who participate in them fully understand just how destructive they can be,” Blackford said.

“One of the things that worries me is the sheer glee and cruelty that can be shown by these mobs when they’re out to destroy people.”

There have been countless examples of Twitter mobs “cancelling” or “deplatforming” those who commit some kind of moral indiscretion.

He examined a number of incidents for his book The Mystery of Moral Authority and said the consequences can be significant.

“With social media, the whole world opens up and you can find yourself piled on by huge numbers of people, often with threats … it’s a significant storm.

“Any second chance someone gets comes much, much later. But that aside, there can be a sheer psychological impact that can make any redemption almost beside the point.

“I’m actually surprised more people haven’t (died by) suicide over these kinds of things. People have lost their jobs, there have been devastating effects on families, and on and on it goes.”

In an age of 24/7 immediate shallow connection we are more alienated and lonely than ever before.