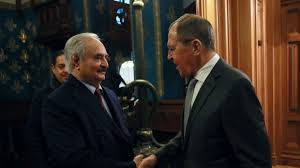 Oh My Goodness!  Even BBC report this event.

So, it took Russia and Turkey – and tag -along Mercurial Merkle, to consummate a peace process.

Why was this necessary?

America and its NATO allies abused a no-fly concession by Russia (during a domestic uprising against Ghaddafi – which followed the 2011 Arab Spring season), and took out Gaddafi.

Until that point, Libya had the best health care in North Africa and per capita income in the country of more than US $11,000, the fifth highest in Africa,

However, implementation of another step by America to deliver democracy to the world, resulted in total chaos – civil war and mass exodus of people fleeing to Europe.

[Perhaps you’ve noticed this justification for unlawful invasion and occupancy of foreign sovereign states, a number of times?]

The NATO intervention created the “unwanted illegal immigrant” conundrum especially for Italy and France but also Germany where Merkle had (initially) an ‘open door policy’.

In politics, there is nothing like the sight of the guillotine, to compel recalibration of policy.  Hence (I suggest), the reason for Merkle tag-along with Turkey’s Erdogan and Russia.

In this peace process, America and its poodle UK – you may have noticed, are nowhere to be seen.