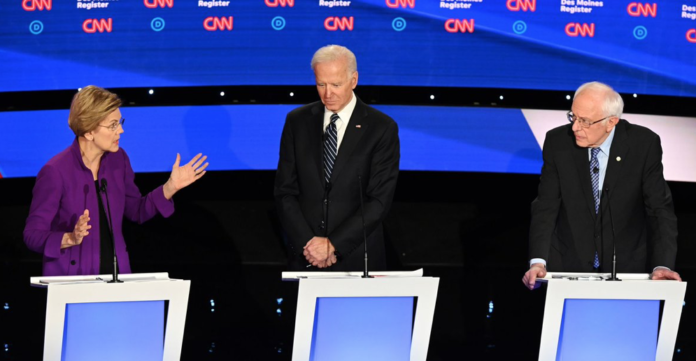 24 hours after leaking an allegation that Sanders told Warren privately that a women couldn’t win as President (minus any context to this alleged comment), Warren used this allegation to frame a narrative that progressive Democratic women should dump their support for Bernie and Biden to support her because women can win (except for last time when one didn’t).

Warren had some set lines to attack Sanders with on this which makes the timing of the leak deeply suspect.

Warren showed she has the ability to throw a punch and set an opponent up while championing identity politics at its most tribal, so she won the night.

That Warren pulled back from shaking Bernie’s hand at the end will only signal all out war online between both factions.

I suspect the Bernie Bros will be firing up at the Machiavellian tactics being employed and the mud throwing to paint Sanders out as sexist which of course will unleash a lot of Democrat feminists who are still bitter from the Sanders/Clinton primary in 2016.

Sandistas and Warrenites will turn on each other between now and the Iowa Caucus with a ferocity that makes the moderate Democrat voting block baulk and flock to Biden for safety.

Sanders vs Warren is the Class vs Identity Politics schism on the Left.