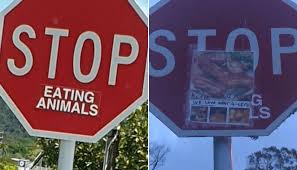 The Gummy Bears, a vegan activism group best known for their stickers and decorated road signs enjoining the public to “STOP eating animals”, have started a chapter in the Waikato and Bay of Plenty.

The newly formed Bay of Plenty Gummy Bears have placed 20 billboards in prominent positions in the Waikato and in Tauranga. The billboards urge the government and the public to “ban the Waikato Rodeo”. This refers to the annual event to be held this year at Kihikihi Domain on 15 February.

“Four horses died at rodeos last year that we know of, and the Rodeo Association’s own figures show a horrendous rate of injuries. It is time the government kept its promise to put an end to rodeo and other cruel practices.”