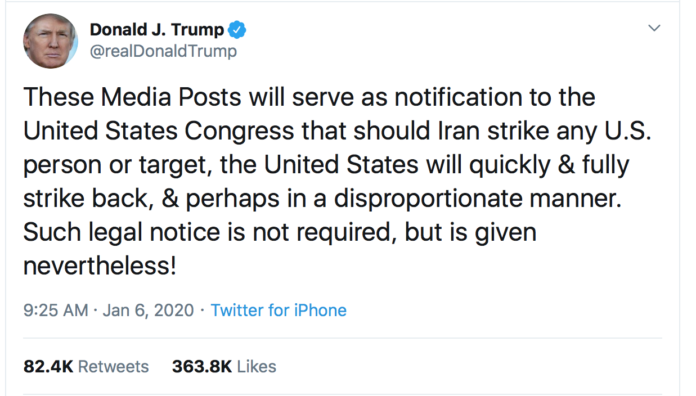 You are openly acknowledging you will respond with disproportionate force?

You are admitting to future war crimes and promising to do it?

Um, well, the planet thanks you I suppose for making your prosecution at the War Crimes Tribunal a lot simpler?

Reading how Trump made the decision to assassinate Sulemani you get this genuinely creepy sense that he had a knee jerk tantrum hearing about the death of a single US soldier & recklessly demanded it with zero thought to the ramifications.

If the threshold for extrajudicial assassination by drone strike is the loss of American life, then when is Trump declaring war on the pharmaceutical industry who pimp opioids, the fast food junkies who clog arteries & the polluters warming the planet?

None of the justifications offered by the White House make any strategic sense whatsoever.

Trump has dangerously escalated towards war for a problem that he has created with his childish withdrawal from the Iranian nuclear agreement.

He has done it as an alpha temper tantrum without comprehending the ramifications.

This isn’t Machiavellian genius, it’s the lashing out of a frustrated bully with no plan of what happens next.

The world holds its breath and the wise shake their heads in disbelief.

It’s the children of the poor who pay the price for Trump’s gamble, it won’t be his kids.