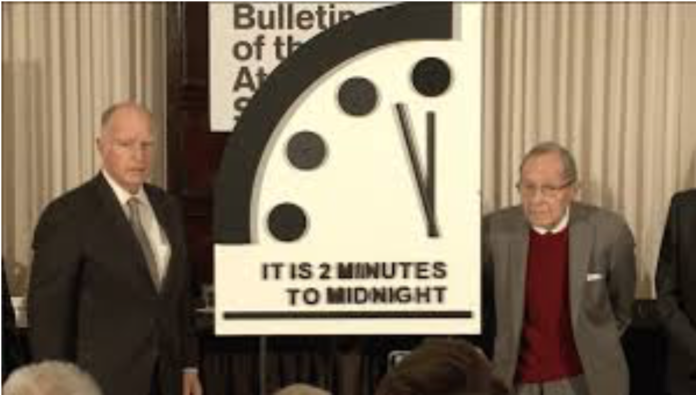 I don’t believe in God, or the parallel opiate of the masses, consumerism. Capitalism, especially this time of year shows we know the price of everything but the value of nothing. But we need something to believe in, beyond what science reveals – science can calculate the damage done to our past, our present and our future, but it can lead to depression, paralysis and dismay – a turning away.

I’m not the only one rejecting belief and hope in some other-worldly saviour, but the rejection of science at societal level is damning us too. According to the stewards of the Doomsday Clock, we’re as close to anthropogenic armageddon as we’ve ever come. The Clock sits at two minutes to midnight. We live in the ‘new abnormal’ –a precarious state where the existential threats of nuclear war and climate change, are aggravated by information warfare and disruption so that we’ve never been closer to global catastrophe – if it’s not already too late.

The authors of the Doomsday Clock report agree – “Nationalist leaders and their surrogates lie shamelessly. There are intentional attempts to distort reality, to exaggerate social divisions, and to undermine trust in science, to diminish confidence in elections and democratic institutions.” “The Enlightenment pillars of logic, reason and truth are being replaced with fantasy and rage.” The fragile international social contract is frayed. Multinational institutions such as the UN and the IWC are rejected in pursuit of sovereign interests. The global nuclear order is deteriorating, and the nuclear control architecture built up over half a century, continues to decay. The climate change threat is getting worse, and even aspirational countries are failing to do what’s required to keep emissions in check. The extinction crisis unfolds in sentinel species and cryptic creatures alike.

So in my tent at the beach, I was mindful of the 70 million forcibly displaced persons around the world this year – now the highest level ever. It’s no tent over their heads, sheltering them from a fun break at the beach. 37,000 people a day are forced to flee their homes. Over half of them are under 18. In New Zealand, around 41,000 people are homeless, half of them women, but including whole families, the unemployed, the student, the working poor. Hundreds of thousands of children live in poverty in New Zealand, and Government redistribution, and an increase in the living wage is met with rising housing and living costs, and a system that keeps them poor.

I walked along the beach, dismayed by the plastic, detritus of a disposable economy – lollipop sticks, bottle tops, rifle shells, marine farm rope and fishing nylon, and collected it to dispose of to landfill. But I thought of the total estimated 8 million tonnes of plastic including 640,000 tonnes of lost, abandoned and discarded fishing gear entering the ocean every year. I thought of the failure to control plastic production, and to support appropriate means of reuse or disposal. Burning it in Asia is no solution but it removes our immediate concern. The domestic ‘plastic bag ban’ and other proposed changes are just drops in a plastic ocean. But that might be the best we can do?

We can measure species lost, name the last Sumatran rhinocerous, the last vaquita, predict the last Maui dolphin. In real time; we get live broadcasts of bombs raining fire on Palestine, homes and orchards bulldozed in the cradle of Christianity; children die among abandoned armaments, there’s an online calculator of rainforest loss. We can look to the skies for evidence of fires burning across the ocean. But we provide subsidies to the worst climate polluters, can’t front up to the unsustainability (and cruelty) of industrial fishing, and don’t mention Israel in the Occupied Territories or you’ll be labelled an anti-semite and your political career will be in tatters.

Camping reminded me of when you could look up and see stars at night. Before light and other pollution rendered them mostly invisible. The effects of extractive economics are radical in impetus, (it’s all extractive), but even the most ambitious reform is incremental. Governments can promise to be transformational but Coalition realpolitik and the power of capital show change is slow and hard. Future generations won’t even be able to imagine what they’ve lost. Diminishing baselines accustom us to the new abnormal. And while people will refer to the success in preventing deaths from curable diseases, and raising people from poverty in the developing world, war and suffering abounds on our fragile finite planet.

The Doomsday Clock scientists urged citizens in every country to use the power of the Internet to fight against social media disinformation and improve the long-term prospects of the future. “Citizens can and should insist on facts, and discount nonsense. They can demand action to reduce the existential threat of nuclear war and unchecked climate change.”

In January 2020, the scientists will again review the position of the Doomsday Clock in relation to looming catastrophe. We end this year, and this decade, with many citizens of the world indeed, mobilised against the threats the Doomsday Clock Committee identified. Greta Thurnberg, Extinction Rebellion, Animal Rebellion, NGOs at climate change conferences and individuals in domestic politics, have called on Governments to listen to the tolling of the doomsday bells. But it’s business as usual – and he who pays the piper calls the tune. Here at the end of the world, the end (of the year) is nigh. We will take a break, spend some more time at the beach, reflecting more on our good fortune, and how we squander it. And return in 2020, ready to resume the fight for a better world.