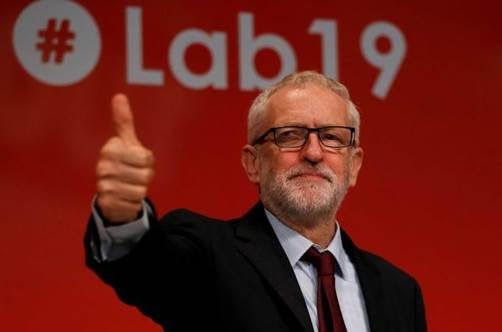 WHAT BETTER DAY to assess the latest contribution from The Daily Blog’s resident Marxist than Election Day in the UK? I’m pretty sure Dave Brownz will be as gobsmacked as I most certainly will be if Jeremy Corbyn’s ends the day with the makings of a majority in the House of Commons. Should the impossible happen, however, the issues raised in Dave’s post will take on a new urgency. The question of whether socialism and democracy can operate successfully together will instantly, in the UK at least, cease to be a matter of academic debate.

The essence of Dave’s argument is that any attempt to introduce socialist policies, while all the core institutions of the bourgeois capitalist order are still standing, is doomed to fail. According to this argument, every socialist reform attempted by a Corbyn-led government of the UK would end up being thwarted. Either, Labour’s changes would be welcomed as a much needed intervention on behalf of Britain’s beleaguered capitalists. Or, if Corbyn’s reforms did, indeed, strike at the heart of UK capitalism, his government would be deposed. Peacefully if possible. Violently if necessary.

Dave’s (and Marx’s) way out of this no-win situation is to call for “the dictatorship of the proletariat”. In place of the social forces which currently run, justify and benefit financially from capitalism, set up an entirely new system operated by its victims. Only then, say the Marxists, can socialism have the slightest chance of surviving and flourishing.

There is a grim logic to this position. Certainly, a socialist government surrounded by capitalist institutions will very swiftly find its room for political manoeuvre shrinking. The courts will intervene on behalf of those affected by its most radical policies. Senior public servants will leak its transformative plans to the capitalist press. Right-wing middle-class students take to the streets in protest. Foreign corporations will threaten to sequestrate the nation’s overseas assets in the event of inadequately compensated property seizures. Hostile capitalist powers will impose sanctions in order to “make the economy scream”. Dave’s argument: that if all these forces are not first swept away by the revolutionary masses, then they will conspire to strangle an infant socialist government in its cradle; is pretty compelling.

To date, Corbyn’s fate lends credence to Dave’s case. In the four years he has led the British Labour Party he has been the target of an unrelenting campaign of personal vilification and political destabilisation. With hindsight, it is clear that the Labour Party has, for decades, been kept “fit for office” through a combination of destruction and creation. The careers of potentially successful Labour left-wingers have been destroyed, while the reputations of those considered a “safe pair of hands” have been enhanced – mostly by Capitalist Britain’s well-positioned defenders in the security services and the news media. Corbyn’s success was a slip-up – a big one. Exactly how big is indicated by the sheer viciousness of the campaign set in motion to destroy him.

It has, however, been an extremely costly exercise for “The System”. To “get” Corbyn, the supposedly left-wing Guardian newspaper was forced to reveal its unshakeable allegiance to the “dictatorship of the bourgeoisie”. When the call came down to make Corbyn unelectable, the Guardian’s journalists and columnists rose to the challenge. Antisemitism was only the most imaginative of the charges levelled against the old democratic-socialist. There were many more and, sadly, they appear to have worked. Boris Johnson may not be much liked or trusted, but he’s more liked and trusted than Jeremy Corbyn.

The temptation to subscribe to Dave’s critique of democratic-socialism’s contention that liberal capitalism can be dismantled and reassembled without sacrificing its “progressive” features – such as Freedom of Expression, the Rule of Law and Personal Liberty – is very strong. Especially once it becomes clear that, as I used to tell my fellow trade unionists back in the 1980s, “all the rights we possess as citizens of a democracy are given to us on just one condition – that we never use them”. But, to move from this bleak realisation to the Marxists’ wholesale embrace of proletarian dictatorship strikes me as a step too far. It requires us to pretend that the terrible events of the twentieth century never happened. That the exigencies of dictatorship – regardless of whose particular class interests it is established to serve – do not lead inevitably to censorship, concentration camps and mass executions.

The trick, it seems to me, is to so conduct yourself as a democratic-socialist government that the capitalists are insufficiently motivated to overthrow you. There is, as alluded to above, a high price to be paid for exposing the iron fist of fascism inside liberal capitalism’s velvet glove. Convincing the Powers-That-Be that your left-wing government has more to offer them alive than dead isn’t easy. It requires a mixture of political wisdom and cunning not often found among the men and women of the Left. Harold Wilson almost had enough to achieve his goal of fusing the interests of British capitalists and British workers in “the white heat of technology” – creating thereby a “producers’ alliance” that would overpower the City of London and “Put Britain First”. Had he been Prime Minister at any other time but the Cold War, who knows, he might have succeeded.

Could Corbyn have made a similar case for a “producers’ alliance” to restore Britain’s waning economic fortunes? If he had somehow contrived to link Wilson’s project to the economic and cultural frustrations fuelling Brexit – maybe. A democratic-socialist European Union: offered to Labour voters as an alternative to the present, bureaucratic, neoliberal monstrosity; now that might have been worth voting “Leave” to achieve. Barring some sort of miracle, however, it’s too late to make that case now.

No doubt Dave Brownz will shake his head at such naivety. But, even as Labour goes down to yet another defeat in the UK, I refuse to abandon the hope that one day we’ll find the right person at the right time. Because, in the end, if your socialism isn’t democratic, then it’s not worth having. No one ever said achieving social justice and freedom would be easy, but then, as my dear old dad used to say: “Nothing worthwhile ever is.”