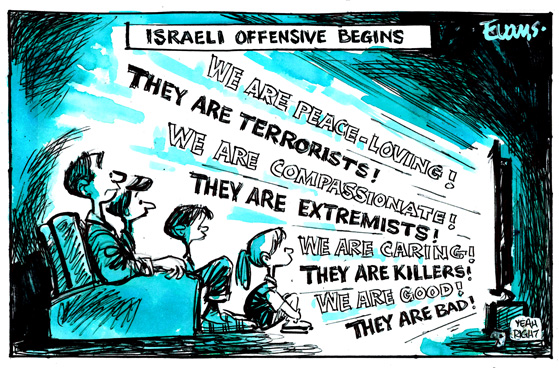 In any discussion of the morality of Israel’s conduct, it is immaterial when you “start your clock” on the history of the Zionist state.

Where you “start your clock” might have some relevancy if the state of Israel had been established in Germany or elsewhere in Europe (Zionists considered Argentina, Uganda and Australia as possibilities for a Jewish state before settling on Palestine) but why would anyone expect Palestinians to pay the price for European anti-Semitism?

The implication that somehow Israel’s brutal oppression of Palestinians can be excused or understood or explained away in light of the Nazi Holocaust can only be based on lazy racism or a superficial cherry-picking of history.

And there is the problem. Palestinians are invisible in Chris Trotter’s “Birth of Israel” piece and yet from the Palestinian point of view oppression is oppression and race-hatred by the Israeli leadership, in words and deeds, is race-hatred.

Trotter also appears confused about the rights and wrongs of the establishment of Israel when he talks about Israel’s “…foundational sins – if sins they be…”. Try explaining that to the Palestinian survivors of the Deir Yassin massacre or the dozens of other massacres carried out by Israeli militia groups in 1948 or try telling it to the refugees denied the right of return to their land and homes in Israel as required by UN resolutions passed every year since 1949 – with the support of successive New Zealand governments.

It’s an important piece of history to remember that allowing the return of refugees was one of the conditions set for Israel being accepted as a member of the United Nations in 1949. Needless to say, Israel has ignored this for over 70 years.

It’s also important to remember that most European Jews fleeing the Holocaust did NOT go to Israel. They either stayed in Europe or went to the US, Canada, Australia, New Zealand etc. Even now more Jews live outside Israel than in.

And while it is true that support for a separate Jewish state gathered strength amongst Jews in the late 1940s because of the Holocaust, this was NOT the reason the United Nations proposed the partition of the Middle East in 1947 into a Jewish state and a Palestinian state.

The simple reason Israel exists is because the imperial powers, Britain and the US wanted to establish a secure base in the oil-rich Middle East. The Zionist cause provided the opportunity.

As far back as 1907 the British Prime Minister Henry Campbell-Bannerman expressed the “problem” of the Arab world for imperial Britain this way:

There are people who control spacious territories teeming with manifest and hidden resources. They dominate the intersections of world routes. Their lands were cradles of human civilisations and religions, These people have one faith, one language, one history and the same aspirations. No natural barriers can isolate these people from one another…..If perchance, this nation were to be unified into one state, it would then take the fate of the world into its hands and would separate Europe from the rest of the world.”

Bannerman’s solution was for Britain to establish an imperial outpost in the Middle East and so Britain hitched its imperial wagon to Zionism. Winston Churchill put it like this

“…a Jewish state under the protection of the British Crown, which might comprise three or four million Jews….would from every point of view be beneficial and would be especially in harmony with the truest interests of the British Empire”

And so today we have the strongest supporters of Israel being political groupings which are steeped in anti-Semitism – the Republican Party in the US and the Conservatives in Britain.

And so Britain, Europe and the US in particular supported the Zionist project, not because they were worried about anti-Semitism or the persecution of Jews but because it would enable western interests to gain control of Arab oil.

The US itself doesn’t need Arab oil, but it does want control of the flow of that oil to its NATO allies in Europe.

That also means endless strategies to divide the Arab world along religious, ethnic and national lines to prevent Arab unity. Any Arab leaders to challenge imperial interests (eg Egypt’s Nasser, or Iran’s Mossadegh) have been driven from power and replaced with puppet regimes. In all these machinations Israel has taken on the key role of the west’s “enforcer” in the Middle East.

In the meantime it’s important for progressive people around the world to support the Palestinian struggle. It took 40 years for the international community, despite opposition from most governments, to defeat apartheid in South Africa. Israeli apartheid has been going for 70 years but it will be defeated just the same.

Just as it was with South Africa, BDS (Boycott, Divestment and Sanctions) against the brutally racist Israeli state is the way forward.