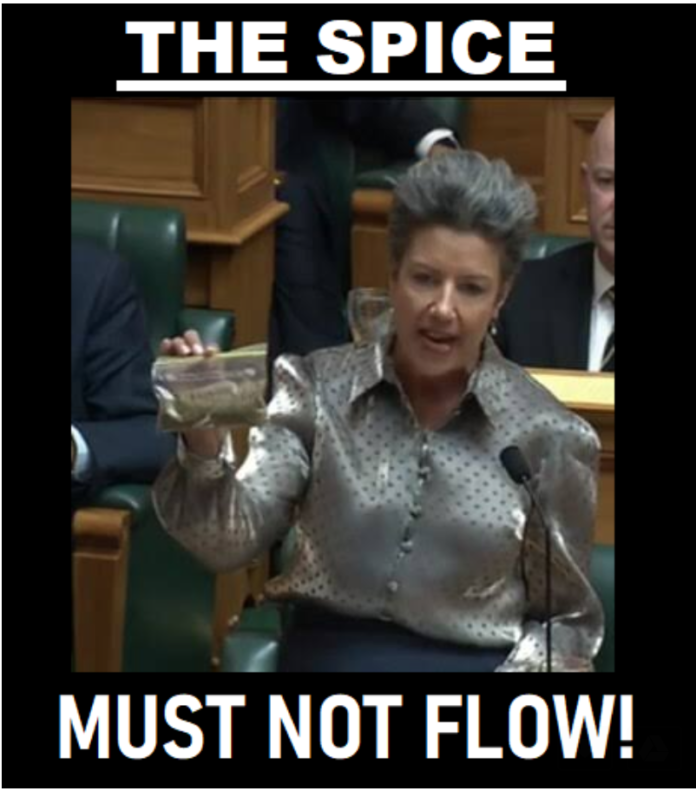 Simon Bridges’ statement that legalized cannabis opens the door to “effectively incentivising cannabis over other legal drugs at the moment – like tobacco and drink” dependent upon the excise tax levied … is a bit of an odd objection to make.

… so if, in addition to raising excise taxation revenue, the legalization of cannabis leads to a relative disincentivization of the consumption of tobacco and alcohol, what’s the problem?

Other than for the alcohol and tobacco industries which have long been closely linked to the National Party.

You know, it is curious how timings work out. Yesterday was four years since the funeral of a good man from NZF. Barry. He was of the vintage where temperance and teetotalism for an individual of quiet Christian faith was a virtue, not a vice. Something I’m not sure the modern National Party would be altogether too keen on.

But I recall him at this late hour, because he would from time to time bring up at NZF electorate meetings out in Pakuranga something he had noticed – that in 1998 or thereabouts, he’d read a headline reading something like “Beer Baron Weeps Into His Beer” , about hte declining profits of Lion Nathan. And then, not long after that, National suddenly announcing its push for the reform of the drinking age down to eighteen .. which, of course, notably improved and underscored the alcohol industry’s profit margins and facilitated the ensnaring of the *next* generations in our worrying drinking culture.

Personally, I am not actually too bothered about the alcohol age of purchase being 18. But Barry’s words have stuck with me.

And when we see this kind of display from the Nats here in 2019, I cannot help but recall them with greater wistfulness; for the man who had departed us those years ago, I mean. And for an older generation of voters who were … not so easily fooled as some are today by the conduct of our political classes when it comes to ‘moneyed interests’ demanding a return upon their ‘investment’.

Something else which struck me about Simon Bridges’ recent statements against the cannabis legalization referendum … is that by suggesting “this has the risk of being New Zealand’s Brexit”, he is not actually suggesting that it’s going to lead to a protracted period of political intransigence and the potential derailment of governing and governments for a three year period.

I mean, he allegedly *is*, but I really really really don’t think it’s in any way shape or form plausible that setting an excise tax level upon legally bought and sold cannabis is anything like as complex as unraveling a half a century’s worth of legal, constitutional, and foreign policy entanglement with a continent and a market of almost half a billion people.

So if that’s not what he’s saying … then what is he *really* getting at by comparing the cannabis legalization #reeferendum to #Brexit?

Well, it’s quite simple, really. He’s telling you that he, and an array of other Technocrat style pseudo-political “leaders”, the managerialists of our epoch, who’ve tried time and time again to stymie the “uncouth” Will Of The People, from Ruthanasia onwards … that these sorts, who think that “democracy” means carefully stage-managing a back-room negotiation process’s pre-determined outcomes being brought into the light as a faux-inevitability – they’re *opposed* to Legalization winning.

And – more than that, much more – they’re *worried*, they’re *frightened* even, that they might actually *lose* this vote.

Which is where the Brexit analogy comes into its own. The reason why Brexit hasn’t been indefinitely shelved thus far, is in large measure because even though the majority of the UK’s political class don’t want it – they know darn well that to just put a *stop* to it , would be to downright *show* the ordinary people of Britain *just how little regard* they actually have for what voters think and feel and believe.

And so they’re paralyzed and forced into attempting to at least *look like* they’re going through wit hit … little by little and inch by inch, pending somebody producing enough polling showing that a vast majority of Biritons may have turned against actually going through with it. Or something. I’m not sure even *they* know anymore.

The point is – the Nats *know* that they would be hard-pressed to try something similar here. So they’re making out like the cannabis legalization proposal – rather than the whole Democracy Thing – is what’s fiddly, unworkable, and likely to all end in tears should they be forced to go through with it.

A bit odd, also, that they’d choose Brexit as a point of comparison, considering that a reasonable swathe of National’s traditional voter-base are probably in favour of it – from a distance, admittedly; and also that New Zealand stands to benefit significantly from Brexit in economic terms.

The latter of which, at least, is something which rather *directly* maps on to the results of cannabis legalization here.

Now I don’t mean to imply that anything which terrifies Simon Bridgs and his ilk is axiomatically a Good Idea … but it certainly doesn’t automatically mean it’s a bad one.