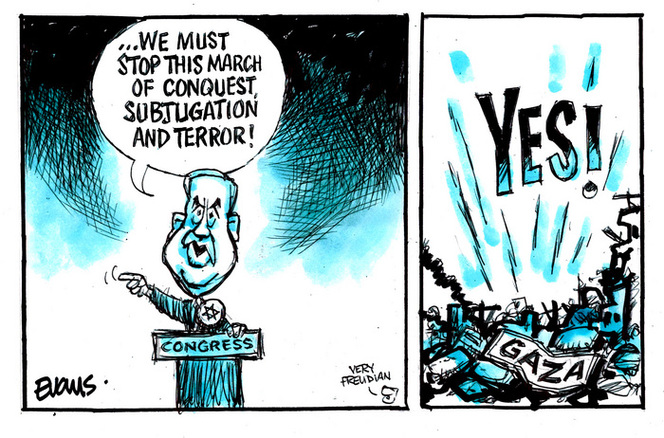 Supporters of Palestinian self-determination and many Jews in Israel and around the world have rejoiced the decision to charge interim Israeli Prime Minister Benjamin Netanyahu with fraud, breach of trust and bribery.

The charges have been in the offing since February this year and include such claims as Netanyahu receiving gifts worth hundreds of thousands of dollars to change regulations to favour a particular media group in exchange for favourable press coverage for himself.

The charges have been laid after Netanyahu has failed twice to form a government after inconclusive elections and now his political prospects are fading while Israelis are most likely to go to the polls again in March 2020 in another apartheid election. [Jews are able to vote and Palestinian Israelis (21% of Israel’s population) can also vote but there is no vote for the more than five million Palestinians who do not have Israeli citizenship but have lived under Israeli military occupation and brutal oppression for over 70 years]

What appears to be the looming end of Netanyahu’s political career will be widely celebrated. He has been Prime Minister of Israel since 2009 and has dominated the political landscape with his forceful personality and vitriolic, race-based, nationalistic campaigning.

In his time as Prime Minister Netanyahu has dragged Israeli politics to the far right through particularly racist campaigns of vilification and demonization of Palestinians.

His hatred of Palestinians has been evident throughout his political career. In 2002 he was caught on camera saying “the way to deal with Palestinians is to beat them up. Not once but repeatedly, beat them up so it hurts so badly, until its unbearable”.

During the 2016 elections he urged Jewish voters to vote his way because “Arabs (Palestinian Israelis) are going to the polls in droves”.

Two weeks ago, with the prospect of the “Joint List” (Palestinian Israeli parties) supporting Netanyahu’s main rival Benny Gantz, Netanyahu denounced the leaders of the Joint List as a “fifth column,” “supporters of terror” and “an existential threat to the existence of Israel.”

In response the Chair of the Joint List of Palestinian Israeli parties, Ayman Odeh, posted a picture of himself in pyjamas, reading stories to his three children. He captioned it: “At the end of a long day, I’ve got to put these existential threats to sleep!”

It was the perfect putdown to Netanyahu but does nothing to address the vile racism at the heart of Israeli political life.

The surest way to tell if a statement is racist is to reverse the ethnicities and see what it sounds like from the other point of view. For example, if a world leader described Jews as an “existential threat” would that be acceptable? What about “The way to treat Jews is to beat them up. Not once but repeatedly, beat them up so it hurts so badly, until its unbearable”?

Most of humanity would find such statements utterly repugnant. They would be quite rightly be condemned as vile, racist, anti-Semitic and an invitation to genocide.

So why is it that international leaders did not condemn outright Netanyahu’s “existential threat” speech? Why would our Minister of Foreign Affairs Winston Peters or Prime Minister Jacinda Ardern think it was not worth commenting on? They would have spoken loud and clear had the same things been said in relation to Jews so why are Palestinians unworthy of the same respect?

Every case of genocide throughout history has begun with words as Chris Harris, Director of the Holocaust Centre in Wellington reminded us a few weeks back in an opinion piece entitled “History shows why hateful words matter”.

Netanyahu is far from the only Israeli leader to use reckless racist rhetoric like this. Israeli leaders since 1948 have all indulged in victim-bashing in relation to Palestinians.

Former Israeli Defence Minister Moshe Dayan said Palestinians should be made “to live like dogs, and whoever wants to can leave – and we shall see where this process leads”.

Last year another former Defence Minister, Avigdor Lieberman, declared that “there are no innocents in Gaza.”

Imagine any other political leader, anywhere in the world, saying that in relation to an entire ethnic community. They would be pilloried and forced to resign in disgrace.

With this political climate in Israel its small wonder that during the most recent Israeli elections the leaders of the leading political parties were competing with each other to see how nasty, brutish and demeaning they could be to Palestinians.

In recent election campaigns Netanyahu has pledged not only to refuse to negotiate establishment of a Palestinian state but also to annex vast swathes of the West Bank and incorporate these into Israel.

This announcement of the intention to commit a war crime against Palestinians was greeted with stony silence by political leaders in New Zealand and around the world.

So while many Jews and Palestinians will celebrate Netanyahu’s political demise he is not the cause of Palestinian suffering. He is just the latest representative of the apartheid state. The overall climate within Israel is so toxic towards Palestinians that there are plenty of others in the wings with racist baggage as bad as Netanyahu.

Take the current crop of Israeli political leaders for example.

Former Minister of Justice Ayelet Shaked, who has the goal of becoming Israeli Prime Minister one day says “What’s so horrifying about understanding that the entire Palestinian people are the enemy?” while her party’s co-leader Naftali Bennet says “I’ve killed lots of Arabs in my life – there’s no problem with that”.

Benny Gantz, leader of the Blue and White Party, who was neck and neck with Netanyahu in the last election is no better. He is portrayed in the Israeli media as a more moderate politician than Netanyahu but he also advocates annexation of Palestinian land into Israel and, as a former army commander, boasted of having bombed parts of the Gaza strip “back to the stone age”.

The most important thing for us to understand is that changing the narrative in Israel towards “loving thy Palestinian neighbour” and moving towards peace and justice in Palestine will not happen if Israel is left to its own devices. It will only be achieved when outside political leaders speak out fearlessly against the rotten, racist politics of the leading Israeli political parties – as some leading Jewish academics and activists are doing – and when the rest of the world brings the sort of enormous pressure on Israel which we did to help end apartheid in South Africa.

The weapon here is BDS (Boycott, Divestment and Sanctions) against Israel. It relies on the people of the world joining hands in solidarity with Palestinians and isolating the vile, racist Israeli regime.

BDS is the only game in town.