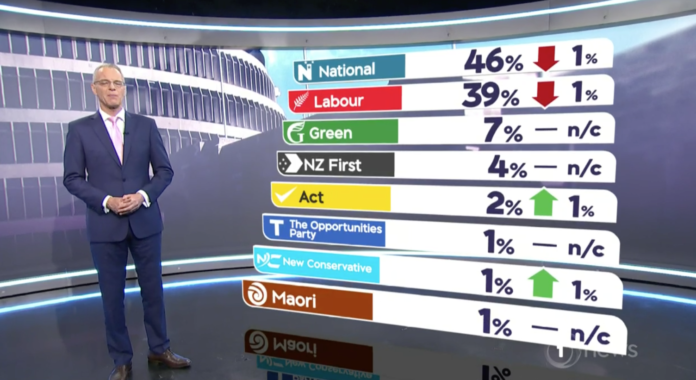 LATEST TVNZ POLL is in and for those paying attention, it’s not a shock or surprise.

National + ACT are the Government.

But, but, but Bryce Edwards and the middle class journalists said the Labour Conference was a roaring success?!? (I didn’t)

What is happening is that while the Political Class love Labour (because Labour are promoting middle class welfare to mainly middle class journalists), outside that class bubble many NZers are simply surviving, not thriving.

National has the highest opposition polling in NZ history and that’s being pushed up by the enormous 17% who have not made up their mind yet.

National are winning the propaganda war while Labour’s only strong counter voice, Willie Jackson, is left to punch back on TV3 and doesn’t have any wider platform.

Many NZers are still waiting for Labour’s transformation and they aren’t seeing it.

Sadly the gun fiasco and free speech idiocy is fuelling a resurgent ACT Party while the Māori Party threaten to pull one Māori electorate away from Labour and bring in a  second MP off the list.

No mates National suddenly have mates.

I said after the conference that Labour’s chances of being a one term Government is still 50-50.

This Poll is suggesting I’m right.

Let’s be clear, personally I think National winning would be disastrous, and Labour must gain a second term. but Labour are not helping themselves with their politics of kindness inclusion glacial consensus making stuff because it means change is incredibly slow.

This is Politics. Sometimes you need to show you can throw a punch to get things done or the voters won’t respect you.