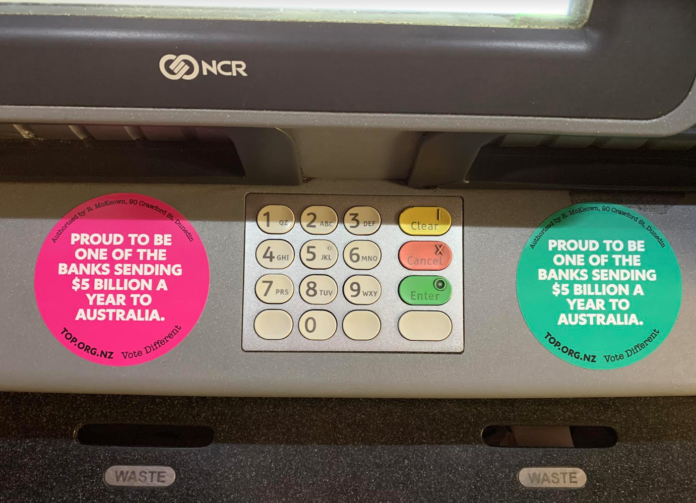 The stickers inform users of the cash machines that ASB, Westpac, ANZ and BNZ are “Proud to be one of the banks sending $5 billion a year to Australia.”

The campaign is part of the political party’s call for a Royal Commission into New Zealand’s banking, finance, and insurance industries, similar to the recent Commission in Australia.

“Given what’s happened in Australia over the last couple of days with the resignations for money laundering that was enabling serious drug networks and pedophile rings, we think it’s time our own industry was investigated,” Party Leader Geoff Simmons says. “We’d like to be reassured their New Zealand operations aren’t involved in anything similar. Given how cavalier the initial response was from Westpac’s now former CEO, we’re not prepared to accept their word for it, either.”

TOP would also like a Royal Commission to investigate the overall competitiveness of the industry, and find out why New Zealand is one of the most profitable banking markets in the world. “The big four banks essentially operate as a cartel in this country,” Simmons says, “apparently with the blessing of successive Governments, which have failed to investigate them or hold them to account. We don’t believe that being a cash factory for the Australian banks is an indicator of economic success. In fact, we believe it’s a clear indicator of economic failure.”

While the big four banks are sending $14 million a day back to Australia, New Zealand also has one of the least affordable housing markets in the world. Simmons: “We have almost an entire generation now locked out of home ownership. I am regularly told by young people the only way they will own a house is when their parents die, and they inherit. Given this reality is created by bad policy choices, and greed on the part of the banks, this situation is simply unacceptable.”

New Zealand also pays more in fees than other countries, with New Zealand businesses paying twice as much for PayWave services as their Australian counterparts. New Zealand’s insurance commissions are also the highest in the world. “A Royal Commission empowered to take a strong and independent look at the financial sector is the only way forward,” Simmons says. “If the banks have nothing to hide, then they will be happy to participate.” Preempting criticism, Simmons says TOP is a strong supporter and advocate of open markets and the capitalist economy, but that it must be built on a foundation of fairness and plain dealing. “At the moment, these banks are asking ordinary New Zealanders to lie back and think of England. Successive Governments have allowed a situation where we have some of the weakest competition laws in the world. A Royal Commission would also be expected to establish what needs to be done to encourage these banks to reinvest more of their profits here in this country, where they make them.” Simmons says the public should look out for its sticker campaign at ATMs all around the country, and to show its support for the campaign by joining the Party. “TOP is the only political party advocating for fundamental change.”