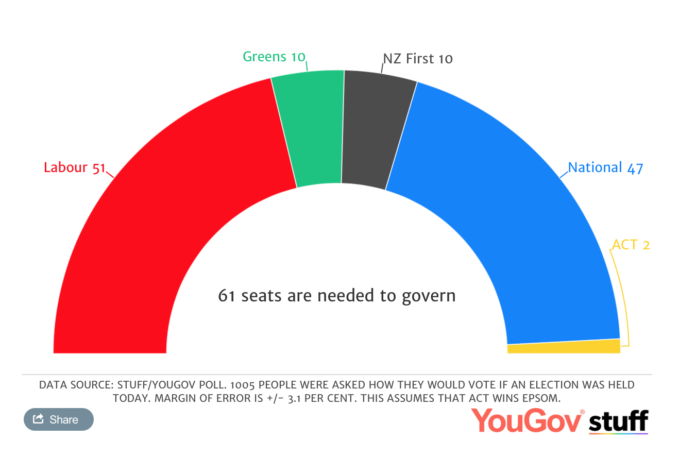 Labour ahead while National dips below 40 in new Stuff poll

Labour and its coalition partners are riding high while National has dropped below 40 per cent support in a recent Stuff/YouGov poll.

The poll put Labour at 41 per cent support, National at 38 per cent, both the Greens and NZ First at 8 per cent, and ACT at 2 per cent.

On these numbers Labour could govern with either the Greens or NZ First with a tight 61-seat majority, while National would have no path to power.

This is such a bad poll because it makes the Left feel a lot more complacent than they should. This is an online poll and online polls are pretty notorious with their accuracy.

The Greens at 8% should make anyone deeply skeptical of the result.

With the chance of a Māori Party upset in one of the Māori electorates, the new Auckland Electorate being a very likely National win and ACTs chance to bring in a 3rd MP, there is no way the Left should be popping the champagne corks right now.