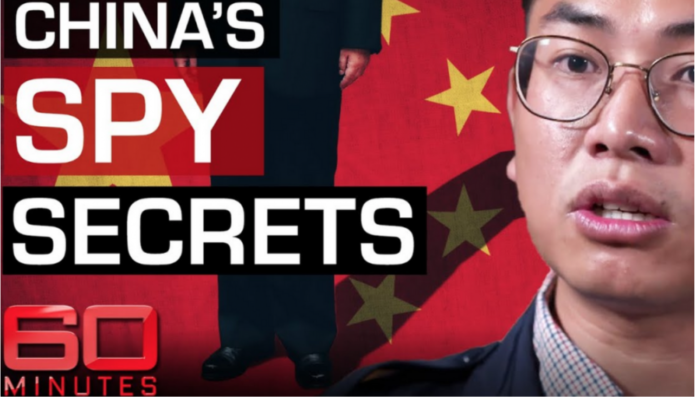 A recent episode of 60 Minutes Australia featured the story of  Wang “William” Liqiang, who says he is a former Chinese spy seeking asylum in Australia. As proof of his claim provided details of how China funds  and conducts some of its operations in Hong Kong, Taiwan and Australia.

In response China has since dismissed Wang’s allegations and have accused him of being a convicted fraudster.

The program also claimed that Nick Zhao, a 32-year-old Liberal Party member and Melbourne luxury car dealer, was offered $US1 million by Chinese agents to run in the federal elections and infiltrate the country’s parliament. Instead of taking the offer, Zhao told the Australian Security Intelligence Organisation (ASIO) about the deal, the programme said, and that he was found dead in a Melbourne hotel room in March. His death is still being investigated .

The 60 Minutes story echoes some New Zealand concerns back in September of 2017 when it was reported  the SIS had investigated China -born National  List MP  Jian Yang in connection with the decade he spent training and teaching at elite facilities including China’s top linguistics academy for military intelligence officers.

In response Dr Yang said he was a loyal New Zealander and was reported at the time as saying “ This is a smear campaign by nameless people who are our to damage me and the National party 10 days from an election, just because I am Chinese.”

Whatever the truth of all of the above the idea that China has spies operating in Australia and  New Zealand ought not to come as a surprise to anyone. All the major powers of the world have their spy networks. We, as New Zealanders , are ourselves part of the ‘5 Eyes’ spying network (along with Australia , the UK, USA, and Canada) which sweeps up massive amounts of private and commercial data and communications from our internet and telecom systems.

But while Spy stories make good media copy and our government may wish to justify the millions they are spending on  spying activities as necessary part of our national security, it seems to me the greater  threat to our nationhood are not the covert acts of foreigners but the overt ones.

The huge economic net China is throwing over Pacific countries (including our own) together with the  enormous economic hold  the giant corporations and financial elites of the West exert on our economy, are all in plain view and yet are progressively undermining our sovereignty far more than the activity of any spies operating in our country.

The current  Labour led coalition government signed up to the CPTPP ( or the TPPA 11 as I prefer to call it)  knowing that foreign investors from some of the larger economies in the group ( Japan. Mexico and Singapore) could sue us if we pass legislation that interferes with their profits.

The betrayal of spies is, in my view, small beer when compared to the massive betrayal of our sovereign right to make our own laws in our own land contained  in these so called  “free trade” deals.