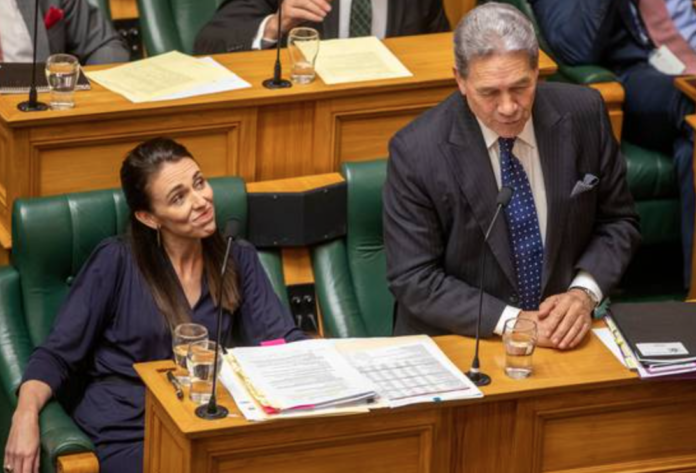 When Winston Peters announced the New Zealand First decision to enter into a Coalition agreement with the Labour Party, he observed it was ‘now or never for serious change in this country’s social and economic direction’. Equally, Jacinda Ardern signaled that she sought a change to capitalism and the way the economy is run. There appeared agreement that the neo-liberal experiment had failed New Zealanders, and the views of many, of “capitalism as foe”, “was not all wrong”. Winston said “capitalism must regain its responsible, human face” and that this view deeply influenced his party’s negotiations. He said he was confronted with the choice between a “modified status quo, or change’, the ‘devil and the deep blue sea”.

Two years on, in New Zealand, capitalism and the electoral term have indeed been marked by an internationally popular, humane face in the form of Jacinda Ardern, but many social indicators have worsened and much structural change has been stymied by New Zealand First while they claim credit for other Coalition policy gains. Apparently Jacinda has sold her soul to the devil himself.

New Zealand First (NZF) plays a zero-sum game – with reputational risks to Jacinda Ardern and the Labour Party who are perceived / portrayed as weak by comparison, while NZF bank the benefits of vetoes (the Capital Gains Tax), dog-whistle politics (anti-immigrant hyperbole), and crony capitalism investments through the Provincial Growth Fund – with potential electoral benefits as these actions resonate with their supporters and undermine Labour.

Winston Peters says the New Zealand First Foundation funding pipeline of up to $840,000 to the NZF Party, comprising 85% of all anonymous donations in the last election, are within the law; he’s not in charge of the Foundation (his friend, lawyer and NZF Trustee Brian Henry is), and it’s a beat up by media ‘psychos’. He says the media should get advice into electoral law (The devil’s in the detail!), Henry has been described as the Party’s ‘dark shadow’, its enforcer, Peters’ ‘attack dog’. In threatening National MP Nick Smith with an incredible $30million law suit, and being Peters’ and the Party’s enforcer, Henry is the devil’s henchman.

The Prime Minister distances herself from Shane Jones’ “toxic drivel” and Winston Peters’ “fake belligerence and feigned outrage”. She’s accused of a ‘shameful charade, pretending to turn a deaf ear to Peters’ diatribes’. She says it’s not her job to defend NZF rhetoric and practices, though obviously it’s not language that she’d use. When asked if she has sought assurances from Peters that the New Zealand First / Foundation donations are legitimate, and whether any of the (anonymous) Foundation donors have received funding or policy favours, she says that’s for the Electoral Commission to determine. It’s not her role to investigate or inquire into the internal practices of other political parties – whether they be National – currently under Serious Fraud Office investigation, or New Zealand First. But media commentators say this is an abdication of her responsibility, given that she is ultimately accountable for actual and perceived Government integrity. Max Rashbrooke says Jacinda is tainted by association, especially given her pledge that this would be the most open and transparent government ever. After all, “neutral men (and women) are the devil’s allies”.

Asked whether it is more difficult for the Prime Minister to ask Winston about the legitimacy and legality of the NZF / Foundation donations because he “gave her the nod for the PM job”, Jacinda reiterated that independent agencies are the arbiters of wrong doing, and that her expectations are that ‘we all abide by the law’, and she ‘wouldn’t want to cast aspersions’. As the saying goes, ‘it’s a brave man – or woman who dares to look the devil in the face and tell him he’s a devil’.

There are suggestions that the focus on questionable NZF funding and donation practices could undermine the Government to such a degree as to prompt a snap election, which is probably desperate and wishful thinking from the National Party. Electoral law expert and Professor, Andrew Geddis says either NZF has broken the law, or the law is not fit for purpose – as it lacks transparency about funders and especially in this particular instance about who might derive favours from the roles of NZF’s Ministers of Foreign Affairs, Racing, Forestry and Regional Economic Development. Danyl McLauchlin in the Spinoff says a snap election might not be a bad thing, though you can imagine that for Jacinda, it’s better the devil you know.