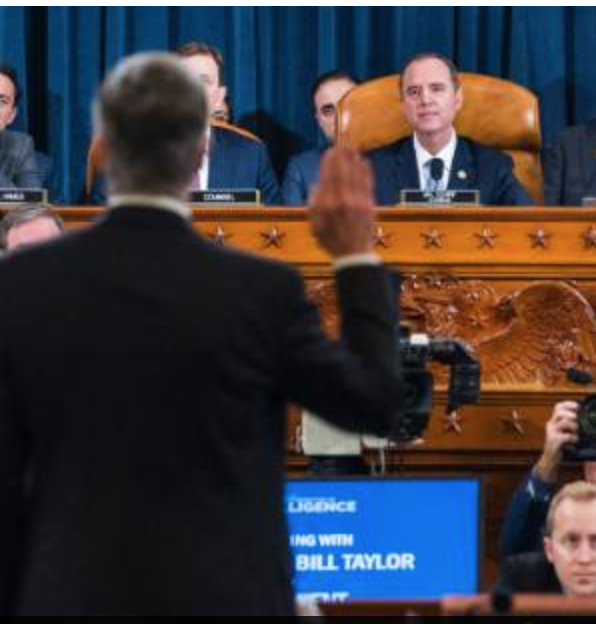 The Impeachment hearings have, in the main, delivered to us little that we do not already know. But some of those things which we already know, are interesting – if only due to the blatancy with which they have been communicated herein.

Consider the testimony of one Fiona Hill, up until recently the Russia analyst on the US’s National Security Council:

Now, on one level, it is rather refreshing for somebody to *actually* state, even if only implicitly, that Russia did not singlehandedly ‘break’ American society nor democracy. That the Americans themselves were *more than capable* of breaking it … themselves, to the net potential benefit of other people(s).

But that is not why I quote this here. Instead, it is because entailed within former analyst Hill’s remarks is something rather more disconcerting, once you look at it for more than the cursory half-a-second you’re supposed to, in order to see “RUSSIAN” plastered repeatedly next to “EXPLOIT” and draw the obvious, instinctive [and somewhat erroneous] conclusions.

What she is in fact stating, quite bluntly and blatantly, is that a ‘divided’ society is a weak and a vulnerable society. That the narrative space which allows, or even encourages, multiple competing perspectives – is a vulnerability.

What she is saying – is that it is democracy itself, and the startling lack of complete success for some kind of totalitarianizing impulse within American nation and polity … that makes the Americans allegedly able to be “hacked” and subverted.

[I would contend, often ‘hacked’ and ‘subverted’ by themselves … but, then, were the Hills of this world to bother themselves with the after-midnight type-tappings of an Antipodean observer such as myself – they’d probably just suggest that I’m demonstrably proving their point for them by subverting their eth(n)os through pushing an “alternative narrative”. Can’t have that, now, can we]

In a way, she has a sort of a point. It is rather difficult indeed for democracy to produce the “wrong outcomes” … if there is no democracy in the first place, after all. And it is hardly a novel thought that the possibilities of greater, or even genuine choice within a society may lead inexorably to ‘subversion’ – after all, that’s exactly how the US and others have historically justified clamping down on far-left political sentiment both at home and abroad, right throughout the Cold War era, prior and beyond.

Yet the question must be asked: if we are now once again at the point wherein ‘killing democracy to save it’ is being semi-overtly contemplated … just what is it, exactly, that is being preserved there. What does “winning” look like? And what is it that makes such a “win” worth actually having – and for whom.

Certainly, it is not a ‘win’ for anybody whose perspective, whose lived experience, whose truth , is an “alternative narrative” relative to that of the mainstream elite.

Moments of crisis – real or imagined or even (especially) downright fabricated – are often seized upon in order to make sweeping changes to the system which they occur within.

The aghast horror with which the prospect of ‘democracy’ producing “wrong” outcomes, or allowing for the debates to take place which question comfortably acceptable [to the elites] ‘truths’ … is already being mobilized towards this inexorable purpose.

And in that situation, wherein the mechanisms via which those holding power can be challenged, called or even held to account , are to be rolled up and stowed away in perpetuity … that does not benefit anybody except those *already* among the elite.

It may be done, in theory, to “protect” from the challenging (or, if you like, “subversion”) of the American system from without … but in reality, it is the dissenting voices from *within* who shall be most harshly repressed. And, indeed, already historically have been.

“Pulling together is the aim of despotism and tyranny. Free men pull in all kinds of directions.”

When the official statements made amongst the highest heads in the land start to insist that permitting differences of perception, of opinion, of preferred course of action [those “cleavages”, and “alternative narratives” aforementioned] is tantamount to scurrilous subversion if not outright treason …

… then it is ‘pull together under the lash, or be rushed’, rather than ‘freedom’ which is dominant.

And “democracy” exists only as an embalmed, desiccated cadaver upon public display in the polis, rather than a living, breathing, yet-vital entity in either sense of that last adjective.