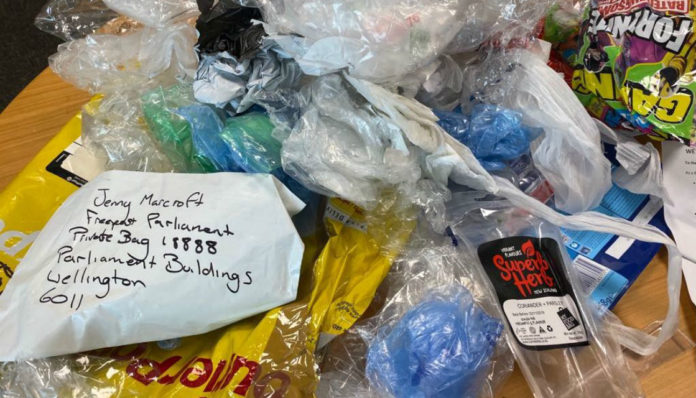 More than 640 letters in parcels filled with nonrecyclable single-use plastics have been mailed to MPs in Parliament via freepost since the plastic2parliament initiative started in mid-October. Another 125 plastic-stuffed letters were directed to National Party Environment Spokesperson, Scott Simpson, this week in a second mailing to the MP.

“When we mailed Mr. Simpson a few weeks ago, we specifically asked he put aside party politics for a moment and let people know what his plastic waste reduction policy might be.” Said Wade Bishop – initiator of the plastic2parliament letter writing initiative that encourages the public to include non-recyclable plastics with their letters to MPs.

“Unfortunately, instead of saying what he or his Party might actually do should they be in Government, he simply side-stepped into meaningless politicking,” Wade Bishop said.

At the time of the first mailing, Mr. Simpson received around 60 letters and plastic parcels and was quoted as saying:
“I’d suggest people send this to the Minister’s office instead as there has been a complete lack of action on recycling and waste minimisation from this Government.” (Ref. Stuff.co.nz)

The second letter sent to Mr. Simpson, again, asked him to support the Product Stewardship changes to the Waste Minimisation Act 2008 (WMA) proposed by the Government (which includes many categories of plastic packaging) but also asked him to advocate for bans of avoidable single-use plastics, such as cutlery and dishes, and a Plastic Tax on imported virgin plastics used to manufacture single-use packaging. (Ref. MFE.govt.nz)

Mr. Bishop said: “The fact is, the powers of Waste Minimisation Act [WMA] have been available since 2008. We could have avoided this deluge of single-use plastic waste, but instead those powers have largely not been used.

“The previous National Government essentially sat on the WMA and did nothing. This current Government is, at least, looking to put some of those powers into meaningful action. The problem for New Zealand is we can never be sure who will be in Government,” he said.

Plastic2parliament is encouraging citizens to ask all political Parties to detail their plastic reduction policies by penning letters to MPs in Parliament, via the Parliamentary Freepost address, asking them to focus regulation on the producers of plastic packaging, while also stuffing their large envelopes full of nonrecyclable plastics to make the point.

The plastic2parliament initiative continues to grow quickly with membership numbers of the Facebook Group reaching almost 1000 people since beginning in early October.

The global oil industry is currently investing US$180 billion in new plastic production plants with the aim to increase production by 40% in the next 10 years and some estimates suggest that plastic-waste volumes could quadruple before 2050.” Wade Bishop said. “This immense supply-pressure makes plastic-waste an issue of over-production with very little to do with consumer demand or consumer choices and it needs urgent, firm regulation.” he said.

Plastic2parliament is a letter-writing initiative started by Wade Bishop of Christchurch which encourages citizens concerned about the explosion of single-use plastics to include these products with their letters to MPs using the Parliamentary Freepost address. The purpose of the initiative is to creatively emphasise how these nonrecyclable products cannot be avoided by consumers and that the actual cause of plastic waste is over-production and use by manufacturers.