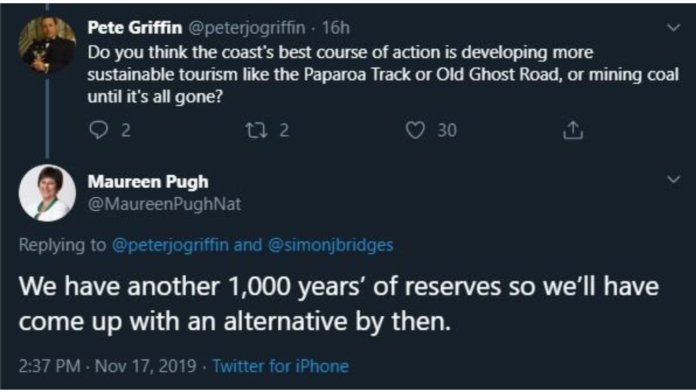 A National MP has said with “1000 years of reserves” of coal on the West Coast, there’s plenty of time to “come up with an alternative” source of income.

About 4000 people on the West Coast rallied at Greymouth’s Messenger Park on Sunday, concerned about Government changes to industries crucial to the region.

They met in Greymouth, calling for support following a raft of legislation including a ban on mining on conservation land and tough restrictions on farming.

“Coasters can’t afford another three years of this Government and its constant attacks on West Coast livelihoods,” Bridges tweeted on Sunday afternoon, smiling for a photo with Pugh, whom he once described as “f**king useless”.

Another Twitter user asked Bridges and Pugh if the West Coast’s “best course of action is developing more sustainable tourism like the Paparoa Track or Old Ghost Road, or mining coal until it’s all gone?”

Pugh responded, “We have another 1000 years’ of reserves so we’ll have come up with an alternative by then.”

We face an existential crisis with climate change. Ever since the Industrial Revolution, human beings have dumped so much CO2 into the atmosphere we are super heating the planet in a way that has never naturally occurred (outside mega volcano eruptions and meteor strikes) in the Earth’s 4.5billion year history.

We are desperately in trouble and have a political system that is too subservient to the existing economic interests that benefit from creating pollution and need political leadership.

It seems that leadership won’t be coming from National any time soon. If Maureen Pugh believes that we can burn coal for 1000 years and wait for a technological fix, we are doomed.

There won’t be a fucking technological fix if we burn 1000 years worth of coal because the fucking planet will be baked! If this is honestly the brains trust of National speaking, they are a zombie in desperate need of lunch.

We suspect that National MPs are all climate deniers, Pugh suggests they are climate morons.