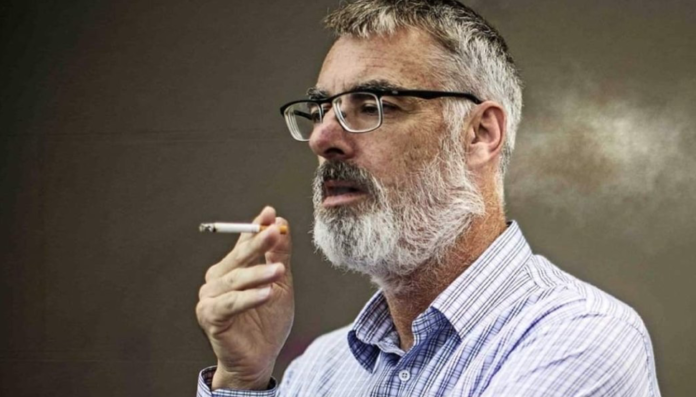 “Let’s be clear, defining people by generation is as stupid as a vegan burger”

Damien Grant, 14/07/19, in a newspaper piece attempting to excoriate businesses who’re trying to be more environmentally conscious, because that might get in the way of profitability occasionally:

“Commerce is hard. Most millennials don’t seem to appreciate this, believing that they should be paid according to the intensity of their feelings rather than any contribution provided.”

Damien Grant, 20/01/19, in a newspaper piece attempting to excoriate “thought-leaders”, “influencers”, and “idiots giving me their insights on a vast variety of complex business issues that they evidently do not understand”:

“Sadly, this affliction isn’t limited to millennials, who have been raised on a diet of Facebook and Instagram and whose narcissism has been fuelled by decades of helicopter parenting. Balding and badly dressed boomers can be seen hustling their wares in this dignity destroying farce.”

Damien Grant, 13/01/19, in a newspaper piece attempting to excoriate … I’m not actually sure. Young people doing much the same thing he does in media, apparently, except with a socioeconomic perspective that’s from anywhere to the left of ACT:

“Frankly, it is pathetic the way our titans of industry refuse to confront the manufactured hysteria of 25-year-old journalism majors.”

Damien Grant, 25/11/18, in a newspaper piece attempting to excoriate “barbarians” poised to bring about the end of civilization as we know it, including “Beijing, Delhi and Alexandria Ocasio-Cortez”, and with an implicit emphasis upon the generation coming after his :

“If it all comes to and end it won’t matter whose fault it was and as I am closer to a long dirt-nap than most I care less than younger readers might.”

Now, these are only a few examples; and some of them are less direct than others. But I think that a cursory examination of Damien Grant’s column-calumny output suggests that he had abjectly no problem pushing generational stereotypes in order to propel strawman pseudo-political invective … right up until the point at which “millennials” started pushing *back*.

I mention all of this not because there’s some especial merit in suggesting that Grant is something of a hypocrite-on-stilts; but rather, because it handily illustrates a core component of just *why* “OK Boomer” has taken off in the way that it has in the first place.

Namely, that it’s the natural response and reaction to being incessantly jabbered at by a cliche-spouting near-caricature of a 1980s-going-1890s out-of-touch rich uncle.

Anything he doesn’t like is, seemingly, LITERALLY “Barbarism”, “Socialism”, “Young People Having Opinions-ism”, etc.; and so there’s no real point attempting to engage in meaningful dialogue – because there’s literally no space for a two-way conversation with someone whose world apparently extends to an end only a mere inch beyond the tip of their own nose.

So if people like Grant – and, to be sure, they come in *all* age-groups; with many Boomers [the generation Grant identifies as] and Gen-Xers [the  generation he’s actually from] being rather *unlike* this – insist on keeping on with their Faux News schtick regardless of what externally obvious reality may happen to have to say about a situation … then why bother to point-by-point refute in depth nor detail.

In some ways, this reminds me of the old political proverbs around the questionable wisdom of endeavouring to mud-wrestle a pig … or play chess against a pidgeon.

Yet what’s actually going on here is somewhat different. It’s the evolved riposte of a generation whose significant formative interpersonal experiences as (young) adults and outside of a social or educational setting … have overwhelmingly been amidst customer service or retail.

There, it is rather quickly learned that with a certain sort of customer, there is simply no point arguing. That regardless of their total lack of merit nor claim of right in a given scenario, the simplest and most straightforward way to actually get on with the job is to faux-placate them, and hopefully get them out of the shop before they indulge in a .. dare I say “childish” temper-tantrum; or, failing that, to at least corral them so that the rest of us can *work around* the now human-sized obstruction.

What does this sound like, upon the shop floor? A slightly repressed audible eye-roll, accompanied with a somewhat drawnout “Ok, sir/ma’am” in lieu of heated counter-argument. Because sometimes, it’s just not worth it. It’s as simple as that.

And that, in essence, is what “Ok Boomer” is – a tacit recognition that the level of energy and effort required to explain a problem to somebody who’s absolutely willfully impervious to the notion of there being a problem in the first place (often due to the level of cognitive dissonance it’d cause given the fundaments of their world-view) … is far *far* beyond any plausible positive outcome that may result from so doing …. and therefore is much better spent on actually doing something (productive) about the issue in question instead.

And *that’s* why it’s riled up Grant the way it has.

Because also, contained therein within it … is the implicit suggestion that he and his views, are not relevant.

That they can be abjured against with a simple two-word rejoinder of a handful of syllables; thus affording the otherwise captive audience who utter it the chance to just get on with their march towards an incipient future.

And nothing  – *nothing* – causes consternation for a loudmouth like Grant, like the idea that he’s not being listened to nor taken seriously. [which, admittedly, I am slightly undercutting by briefly penning a response at 04:30 in the morning]

So therefore it’s the Kids’ fault that we’re saying we’re politely but firmly not interested in what he’s peddling. How *dare* we. How very dare, indeed.

Instead, we should be downright *thankful* for the privilege of being repetitively dismissed in print media by somebody who identifies as having survived “actual nuclear war”, simply for our [rapidly fading] youth.