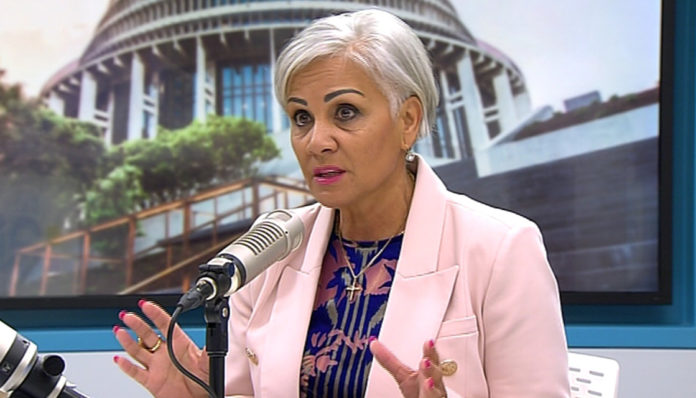 It is often said that when a politician or other public figure says something disparaging about a particular group, that the weight and impact of their words is not only in what they’ve said … but also what further statements, what further actions it tacitly allows, invites, and encourages.

Yesterday’s press release from Vision NZ, and accompanying remarks from Hannah Tamaki, are a case in point. Coming hot on the heels of Jones’ own headline-chasing invective toward the Indian community, we have these guys putting out comments about prohibiting the construction of any new Mandirs, Mosques, etc. and insisting that there’s only “room in our society” for one faith, culture, and set of customs here in New Zealand.

Where does that leave you if you’re not part of (or, at least, not only part of) our now apparently unitary “[culture], faith [and] customs”? I’m not entirely sure. Vision NZ don’t seem to be too clear as to what they want done with anybody who *doesn’t* want to “integrate” – and, assumedly, convert, given the rather pointed highlighting of “faith” as something we’re not going to be allowed more than one of in this country.

Now to be sure, however personally annoyed I might be about it, what Tamaki/Vision NZ have done here is arguably at the lower end of the spectrum in terms of its actual, tangible impact. A press release and a poor interview are not a brick through the window of a religious building; and with Vision NZ unlikely to get any closer to the actual levers of political power in 2020 than a really, really far away thing … it is also a rather remote possibility that what’s been said by said party will ever *itself* turn into anything more substantive than just that. Words.

Which is rather ironic, as that’s exactly what Hannah Tamaki was castigating Shane Jones for in her press release and accompanying verbiage – that all his comments amounted to were words were little prospect of actual follow-through and serious action behind them.

But that is not the point. Well, except insofar as these surely ETS-regulated for methane content outbursts tell us something about the nature, the character, the values, of these greasy-pole dancers jostling for our psephological attentions through the media.

What is, is observing the way in which Jones’ initial volleys and ensuing escalation, have set the tone and helped to prepare the ground for Tamaki’s more recent and markedly less subtle “contribution”. [It is an open question as to whether the ensuing lack of subtlety in Tamaki’s remix of Jones’ careful leitmotif here, says more about the utterer, or merely its intended recipients]

Jones Spake, and what Jones had implied, or communicated subliminally … others have now picked up upon, amplified, and projected out damn near superliminally. Because that’s how politics, as with most areas of interpersonal affairs in large-scale networks, tends to occur – a smaller, but more forceful move at one end, generates ripples or waves which soon turn into larger, yet less finesseful currents. Occasionally, as Goethe observed, burning *well* out of any control or scope of intended design of their first initiator.

Thanks, in part, to several prominent media outlets running headline pieces on Tamaki’s ‘proposal’, this pattern of ‘broadening’ of the sentiment in question is likely to continue for awhile yet – both about our politics, and beyond. Although what this probably means in practice is more on the order of an uptick in Talkback callers and Letters To The Editor picking up and advocating the concepts in question.

Were this America, I would perhaps be a little concerned about what’s known as the ‘Overton Window’ [the general envelope of ‘acceptable’ opinion within a mainstream political sphere] shifting out in this proffered direction as a rather directly attributable result; perhaps bringing Australian-style “One Nation” antics [that’s Pauline Hanson, not Benjamin Disraeli] to our shores. [Or, for that matter, enabling something like the ongoing situation of one of the candidates for the Democratic Presidential nomination – Congresswoman Tulsi Gabbard – who seems to face recurrent attacks on the basis of her (Hindu) religion every time she runs, including attempts to have her declared ineligible for office due to spurious something something Hinduism incompatible with the Constitution of the United States and its values something something. Charges not entirely dissimilar to those once levied at John F. Kennedy for his Catholicism, as it happens]

But despite Jones’ flirtations with wearing a deliberately Trump-style “Put New Zealand First Again” cap during the past Electoral season, and the Tamakis’ own demonstrable enthusiasm for a quite literally American brand of Christianity with occasional GoP characteristics … we are not there.

Which means that I have the considerable luxury, in a way, of simply being infuriated by what’s contained within Tamaki’s remarks, rather than seriously apprehensive that I might find my local Mandir’s been vandalized or a Pandit beaten up in the street, deported for being .. well ..  a Priest, etc.

Now, it is at this point that I should perhaps take a moment to overtly address my own biases in all of this. Which is something I somewhat doubt Tamaki has actually done, even to herself, upon this matter.

I am one of this country’s more than one hundred and twenty thousand Hindus. And, while I like to think that I do a rather better job of putting the “fun” back in “religious fundamentalist” than Tamaki does, I’m nevertheless capable of recognizing that the degree to which this decree has a personal saliency for me, means that I’ve responded to it rather differently than if it were a more … abstract issue, from my immediate perspective.

Which doesn’t mean that I wouldn’t be distinctly unimpressed about what ‘Vision NZ’ have put forward here, if it were ‘just’ about Mosques & Muslims, Gurudwaras & Sikhs, or even, for that matter, Synagogues & Jews [oddly, they seem to have skipped a mention in Tamaki’s list of Forbidden Architecture]. Hell, I’d probably even be annoyed if some pair of coverage-coveting politicians had sought to suggest banning Destiny Church – whether from constructing new facilities, or just all up and altogether, for the foreseeable future – as a pathway towards the cheap fifteen minutes of “most read story” status, and maybe a few votes down the line into the bargain.

Because, in no small part, even though most of the rest of the ninety seven odd percent of the country’s religious (or irreligious, for that matter, for almost half) values are not mine, that doesn’t mean I now start thinking of everybody else, all of these, as being “foreign” and having no “place” in our country nor society. You may as well start going around banning various political parties you’re not totally in agreement with, because they, too, are in some ways extraneous and ‘alien’ to your own, personal, ‘reality’-tunnel world view. It’s not how a healthy, stable, functional society tends to work – and does rather irrepressible harm to the actual fabric thereof through the manner of its enforcement.

I doubt Hannah Tamaki is thinking of having a localized version of the Spanish Inquisition (or, perhaps more darkly, its Portuguese equivalent in Goa) in order to enforce the “integrations” of “faith” she’s calling for – not least because I doubt she’s thinking much at all. In terms of the actual detail of policy, I mean [although last month’s press release from Tamaki demanding that Jacinda Ardern attempt to *ban* gay conversion therapy … I am not making this up … somewhat suggests that it’s not only the realms of actual policy-detail and practical application wherein “Vision NZ thinking” is a bit oxymoronic] .

But straight-up. My insta-reaction to reading Tamaki’s statements upon this matter, was to basically feel that they were almost tantamount to a declaration of war. Or, at least, would be, if anybody much were likely to take them too terribly seriously – or, perhaps flowing directly from that, if Tamaki was actually likely to be in a position to put them into tangible effect a little further down the line.

It certainly went rather beyond Jones’ comments which effectively kicked the whole thing off, at any rate.

Now, once we situate Tamaki’s offensive as what it is – both an echoing and a direct continuation, amplification, of Jones’ campaign … the serious question becomes whether the whole thing’s begun to fizzle out, or whether it’ll continue to spread and lose yet further ‘nuance’ in the process. I’d already observed a shift in the framing even before yesterday’s occurrence, from people writing and speaking about “Arranged Marriage” to “Indian Marriage”, for instance – and it is not too terribly far from there to the implication, as Tamaki appears to have picked up upon, that it is not the “arranged” part of that concept which is the issue, but rather some generalized concept of “Indian”.

It’s tempting to simply close off by tapping out that despite all of that, this is New Zealand. And that therefore, beyond the perhaps predictable uptick in “s/he’s just saying what we’re all thinking!” attempted-letters to the editor and calls in to talkback radio from people with nothing better to do than try garbing themselves in the voluminous folds of the cloak of false moral majority … nothing much shall happen. Not in the broad sense, anyway. Maybe a few people get hassled in person by sorts who’d quite likely be favourably disposed towards doing so anyway, regardless of what some Government Minister, or er .. minister’s wife attempting to Government … had to say about an issue.

But without intending to be overdramatic about it, following certain events earlier in the year, I’m not entirely sure that that state of affairs is as ‘guaranteed’ here as it seemingly once was. It is not inconceivable that somebody out there, in whichever sphere, may seek to make some mileage out of picking up and pushing further, the ball which first Jones and then Tamaki have sought to set into (political) motion.

One thing I think I can state with greater confidence, however, is that while it is something of an open question as to whether one or even both of those two figures aforementioned shall still be percolating about our nation’s political punch-bowl by this time a few years’ hence …  there are almost certain to still be Mandir Shikharas rising above various sites here. Whatever Talkback or Tamaki might have to say about it.

Because political opponents come and go.