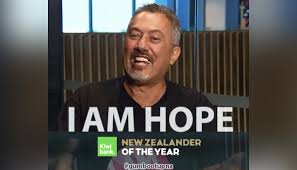 The Ministry of Health has refused a request for a financial top up for youth counselling charity, Gumboot Friday, frontman Mike King claims.

But instead of being “angry or upset” about the decision, King claimed he was using the knock back as motivation.

In a Facebook post on Wednesday afternoon, King has called on New Zealanders to help raise $5 million on the Gumboot Friday in April next year “so our kids can get the counselling they deserve”.

Of course the Ministry turned down something as innovative as Mike’s suicide prevention programme, because since when did the Ministry manage to do anything meaningful when it comes to suicide?

After being asked to apply and then getting smacked down is shameful.

Mike’s programme bypasses the ridiculous wait many who ask for help are forced to endure and gets immediate them immediate counselling without the red tape.

The Ministry however loves red tape and a programme that bypasses their lumbering response to suicide threatens that.

Mike’s ability to find optimism and keep fighting the fight marks him out as a remarkable New Zealander.

I’m still not sure what the Ministry thinks it’s actual role is, suicide prevention or preventing NGOs from upstaging them.