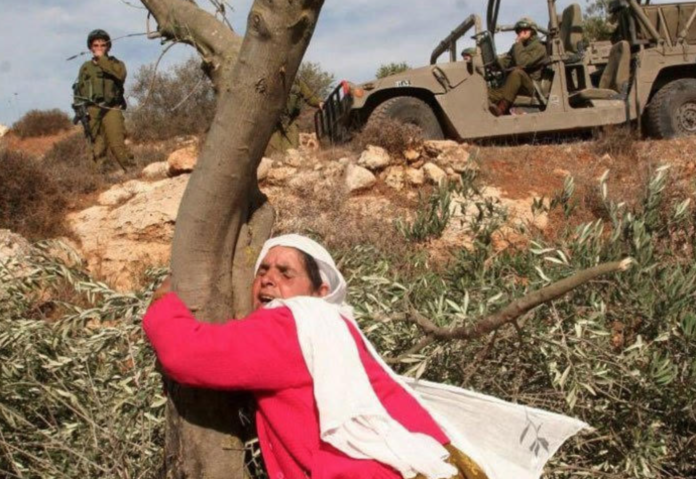 The Rome Statute of the International Criminal Court (ICC) was established as court of last resort for the prosecution of four international crimes: genocide, crimes against humanity, war crimes and the crime of aggression. Whereas Australia, New Zealand and Palestine are States Parties to the Rome Statute, Israel and its close ally, the USA, choose to remain non-signatories. Israel’s refusal to be a party to the ICC is because, as an Occupying power, it is guilty of the transfer of parts of its civilian population into Occupied territory, which constitutes a war crime. Tragically, war crimes, and attempts by perpetrators to justify them, inevitably beget more atrocities and violations of international law.

On 16 October this year, after being stoned and beaten with metal bars, an 80-year-old rabbi, Moshe Yehudai, lay in an ambulance with a head injury and broken arm. He described how he had “feared for his life” and that his assailants had ignored his appeals for mercy. Yehudai, an activist with the Israeli Rabbis for Human Rights, was one of five people injured that day near the village of Burin. The assault was perpetrated by Zionist fanatics from the Yitzhar Israeli Occupation settlement. The violence that Yehudai and his fellow humanists suffered was because they had dared to confront settler militants intent upon terrorising Palestinian olive harvesters.

On the day that Moshe Yehudai was assaulted, two Palestinian children, aged 10 and 12, were also “severely assaulted and subsequently hospitalised.” The settlers went on to uproot olive trees and set fire to olive groves. Avi Dabush, the Executive Director of Rabbis for Human Rights, declared that the volunteers would not be deterred from helping the Palestinian farmers as they harvest their olives. “For the last 17 years we have helped with the harvest, and we will continue to stand up against violent bullies,” he said. Rabbis for Human Rights is a member of a group of Israeli human rights movements known as The Harvest Coalition, that includes supporters such as Ta’ayush, Coalition of Women for Peace and Combatants for Peace, among others.

Palestinians have to live with homes spray-painted with Stars of David that have now become terror symbols, along with settler graffiti often including racist hate messages. While violent settlers roam freely, Israel’s military Occupation prevent Palestinians from accessing their own land and Palestinian agriculture is under constant threat from both the Israeli Army and settlers. In the past month of October, Israeli Army and settler vandalism, especially towards Palestinian agriculture, began with the Israeli Army bulldozing olive and almond groves in the al-Cremisan area of Beit Jallah and destroying a cave dwelling. The same week, Occupation settler militants raided Qirat village, slashing the tyres of 13 vehicles and spray-painting racist messages on the walls of Palestinian homes. From 7-23 October, illegal Israeli settlers carried out 27 acts of agricultural sabotage against the Palestinian olive harvest, including one assault by an armed terrorist from the  Avnei Hefetz settlement.

The Israeli Army itself carried out five such attacks, one of them explicitly in support of settler sabotage. On 7 October, Israeli forces seized and bulldozed agricultural land in the al-Batun area in Farkhat village, uprooting 160 grapevines and 50 almond trees. The violence includes arson attacks (on 8 October, militants from the Yitzhar Israeli Occupation settlement set fire to approximately 70 Palestinian olive trees), stoning, beatings and the destruction of trees and agricultural implements. On 10 October, Israeli settlers raided the Ein al-Hilweh district and seized control of the area’s spring, thus denying the use of water to Palestinian farmers. The Wafa News Agency reported on 14 October an attack on olive harvesters by an armed settler who threatened to shoot them if they did not leave.

On 18 October, the Israeli Army prevented Palestinian harvesters from entering olive groves in two areas, one near Beit Furik and the other on Qaryut village land. On 22 October, Israeli troops, in Deir al-Ghusun, fired stun grenades and tear gas canisters at Palestinian farmers who were protesting against being shut out from their land. The Israeli Army then temporarily detained several farmers, after closing the wall gate entrance and destroying their entry permits. There were several tear gas casualties. The Army also prevented Palestinian farmers from gaining access to their land in western Qaryut village. On 24 October, in Nablus, Israeli forces fired rubber-coated steel bullets, stun grenades and tear gas canisters at olive harvesters near the Eli Occupation settlement, and forced them off the land. On the 26 October, armed Israeli terrorists invaded Turmusaya farmland, opening indiscriminate fire, Israeli forces took prisoner a Silwad resident, Odeh Abdallah Hamad, while he was harvesting olives and, that evening, more Israeli settler militants assaulted olive harvesters on Um Safa village farmland. The violence continued that morning, with Israeli settlers assaulting olive harvesters on Yasuf village agricultural land.

On 27 October, Israeli forces in Salfit prevented farmers from entering their land trapped behind Israel’s annexation Wall and also stopped several other farmers from entering their Mashat village farmland, also trapped behind the Wall. The next day, an armed security guard from the Kedumim Israeli Occupation settlement, in Kafr Qaddum, threatened olive harvesters and drove them off the land, while a stone-throwing gang from the Beitar Illit Israeli Occupation settlement in Nahalin injured an olive harvester, Yusef Mohammad Sabatin. On 29 October, for the third time, fanatics from the Yitzhar Israeli Occupation settlement invaded agricultural land, this time in al-Naqqar, Huwara, where they beat up olive harvesters, injuring and hospitalising three of them, Nasser Al-Huwari, Kamal Odah and Mohammad Shihada.

From 7 October, the self-serving malevolence that drives Israel’s founding ideology exemplified itself in the outright theft of Palestinian olives. That afternoon, Zionists from the Yitzhar Israeli Occupation settlement stole the olive harvest from the Khilat al-Ghol area in south Burin village. As the month went on, the plunder grew. On 8 October, a gang of Israeli settlers stole the Palestinian olive harvest in Wadi Qana. On 17 October, settlers invaded Burin village farmland, beating up three people and making off with some of the produce and, on 21 October, other settlers invaded Yasuf village farmland and seized the harvest, with the support and complicity of the Israeli Army.

Israel’s militarily-imposed rule over the West Bank is run by what the Occupation calls a ‘Civil Administration‘. Whatever it chooses to call itself, the Civil Administration employs contractors to destroy Palestinian irrigation and olive groves, bulldozing crops and erecting barriers to cut off Palestinian farmers from their land. The results, in every case, are heartbreaking and ruinous for the defenceless population. More than 100,000 families are dependent upon the olive oil industry and the trees are symbolic of historic Palestinian attachment to the land. On 30 October, militants from the Elon Moreh Israeli Occupation settlement raided Deir al-Hatab agricultural land, seizing and taking away the olive harvest and damaging olive trees.

In recognition of Palestine agreeing to submit itself to The International Criminal Court’s jurisdiction, the ICC has confirmed that its jurisdiction would date back to 13 June 2014. The Court, therefore, has jurisdiction to investigate violations of international law committed by Israel in Occupied Palestinian Territories since that date. Israel’s non-membership of the ICC cannot protect its citizens from the possibility of being tried for crimes committed on Palestinian land. ICC jurisdiction can be exercised when national courts are unwilling or unable to prosecute criminals or when the United Nations Security Council or individual states refer suspected violations to the Court.

But international justice relies on the support of states to arrest those suspected of committing crimes against humanity and to protect victims and witnesses. It also depends upon the provision of resources the ICC requires to fulfil its mandate. Of the 120 or so countries that have joined the ICC Rome Statute, 70 have adopted laws to prosecute war criminals domestically. The problem is, that even in cases brought before state parties to the Rome Statute, politics and alliances can intervene to hinder due process. The New Zealand Yearbook of International Law cites – in meticulous detail – the course of a failed attempt at prosecution in New Zealand – the Ya’alon case.

The Yearbook’s introduction to the case reads as follow:

“On 27 November 2006, the District Court in Auckland issued an arrest warrant for Lieutenant General Mosche Ya’alon, former Chief of Staff of the Israeli Defence Force, who had recently arrived in New Zealand. The warrant related to allegations that, in Gaza, Palestine on 22 July 2002, he had committed an offence against s11(1) International Crimes and International Criminal Court Act 2000 and s3(1) Geneva Conventions Act 1958.

“Both of those New Zealand statutes asserted jurisdiction over war crimes even when committed outside of New Zealand. The episode was part of a global attempt to hold Ya’alon, as well as many other Israeli military commanders and political leaders, to account for their actions in the Palestinian Occupied Territories.

“The day after the Court issued the warrants but before they had been executed by the Police, the Attorney-General filed a warrant with the Court staying further proceedings on the Information filed. In light of that, the following day, the District Court stayed the proceedings and cancelled the arrest warrants. Mosche Ya’alon continued his trip unimpeded.”

The adoption of the Rome Statute in 1998, which resulted in the establishment of the International Criminal Court four years later, had been led by the Coalition for the ICC. The Coalition worked to get states to negotiate “a strong treaty with provisions for a Court independent from the United Nations; Independent judges and an independent prosecutor; No immunity for presidents, generals or other government officials; Strong defence and fair trial rights and the ability for victims to participate in courtroom proceedings and receive reparations.” An offshoot of the Coalition, the Campaign for Global Justice is pressing for Universal Ratification of the Rome Statute.

To date, no high-ranking Israeli civilian or military official has faced prosecution over the Israeli Occupation’s crimes against Palestinian human rights. Even after the 2014 Israeli ‘Protective Edge’ Gaza atrocity, when four Palestinian human rights organisations informed the ICC prosecutor of the status of 369 criminal complaints submitted to the Office of the Israeli Military Advocate General, there were no prosecutions.

Because the ICC moves to hold the powerful to account, it is facing a concerted backlash. Justice and human rights are under greater threat than ever, both globally and nationally. The appalling mockery of justice in the Westminster Magistrates Court, London, on 21 October should wake us up to the dying democracy and erosion of justice that is taking over our ‘traditional allies’. The broken and confused whistle-blower, Julian Assange, found himself scorned by the Judge, while US Government officials handed instructions to the Prosecution to relay to the Judge – who then ruled them as her legal decision!

World War One saw a proportion of civilian-to-military casualties of 15%. In the Second World War, that figure increased to 65%. Since the establishment of the United Nations, the percentage has now risen to 90%, with most civilian casualties comprising children and women. A 1996 report by Graça Machel, Impact of Armed Conflict on Children [5/151], noted that, “Armed conflict kills and maims more children than soldiers.” Powerful vested interests, driven by greed and addiction to power, rely on tools, such as UN vetoes and influence over the mainstream news media, to prevent progress and reform. It is time for the whole world community to have equal voice and representation at the United Nations.

Demand that our Government leaders and lawmakers honour their responsibility to protect human rights and stand for universal justice. A truly independent and principled stand by New Zealand could set in motion a transformation of expectation throughout the world community. Paying lip-service only to rules-based international relations is betrayal. Humanity has the right to expect so much more.