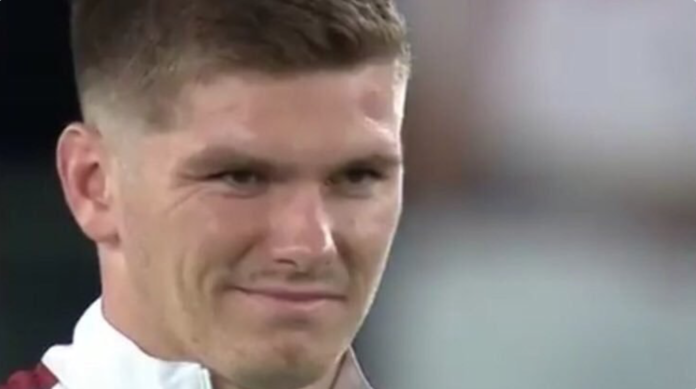 In the 2003 rugby World Cup when Australia defeated the All Blacks, losing coach John Mitchell was pilloried and humiliated. Local fans and journalists belittled his coaching ability and laughed at his new age vocabulary (the `journey` had ended with a thuddering halt). When Mitchell left New Zealand for an international coaching career there were no outpourings of sympathy , `good riddance` was the prevailing view. I wonder who is laughing now, privately at least. As England`s defence strategist  Mitchell  completely out thought the All Black coaching team. In and around the breakdowns the All Black forwards were either  driven into the turf or stopped from recycling the ball. The halfback and flyhalf were harried constantly and the centres were knocked over as soon as they received a pass. The wingers were bundled into touch and the fullback had little ball to run with. In short Smith, Mounga, Leniert-Brown, Goodhue, Reece, Bridge and the two  Barrett brothers in the backline were played out of the game by their counterparts – Youngs, Farrell, Ford, Tualigi, Watson, May and Daly. England had memorised every attacking ploy attempted by the All Blacks. Of course, losing lineouts and backpedalling in the scrum didn`t help New Zealand`s cause either –  Itoje, Lawes, Sinkler,Marler,Curry and Underhill were immense. However ,without the suffocating defensive system devised by Mitchell the All Blacks  might have counter- attacked their way to victory.

The lesson to be drawn is this – at the highest levels of professional sport, including rugby union, intellectual property cannot be secured indefinitely within national borders, plagiarism is rife. New Zealand coaching expertise is a major export and a key conduit for advancing the  global game ,especially among tier two countries. However, when this same expertise assists already powerful rivals the results of all – or-nothing knockout  games can be affected. Just as importantly, forensic video and psychological  analysis of the opposition`s previous victories can reel in a frontrunning team, the secrets of success can be identified and appropriated. To this end English coach Eddie Jones  developed a two step plan.  First, nullify the All Blacks` dynamic combination play between forwards and backs. Second, identify ,plagiarise  and rework the key components of past All Black success. An intimidating, ball winning forward pack – check- superlative fitness levels throughout the squad – check – triple threat attacking plays (running, passing, kicking) – check – implacable mental resilience – check –  a formidable pre-match challenge -check. We can see here why Eddie Jones was so gracious in victory, the All Blacks themselves provided the template for his triumph.

So ,where does leave English rugby, in relation to the All Blacks? At the time of writing it’s a bit early to tell, the England – South Africa final is yet to be played.  I will though hazard an educated guess. At present this is the best England team I have seen. Nearly half of their players – forwards and backs – would make a world best team. The English rugby system is wealthy by international standards and the player base is large. Intellectual property and coaching expertise can be purchased easily and big, mobile, collision- winning forwards will be in ready supply. There is a problem though, the wealth and power of the English (and European) clubs will prevent England from establishing an All Black level  winning percentage away from home. The northern hemisphere club season is long and punishing for the players. Outside of World Cup`s and the Six nations some English players will be unavailable for the national team. In any case it is the major clubs that are most opposed to an international calendar competition (similar to that developed for test cricket). Yet, such a competition ,over time , could further strengthen the English team.

Meanwhile, back in New Zealand, a different set of problems are apparent. Club teams and player numbers are dwindling ,especially in Auckland. Concentrations of  rugby talent  among wealthy secondary schools weakens the sport as a culture of participation. Even talented young  players  leave the game after high school  if they can`t get a contract or make an academy team. Of late, the best young adult performers are struggling internationally. At this years World under 20 tournament New Zealand finished seventh (down from fourth in 2018). At elite international  level  the All Blacks national contracting system remains a definite plus. It allows talent to be marshalled systematically because the NZRU ,provincial  unions and the super franchises can work together as a coherent brain for the national team. The departure of Steve Hansen though, constitutes a loss of institutional memory, a new way forward for the All Blacks must be developed. I`m with Laurie Mains when he says that any new coach must have experienced adversity in the process of building a successful team and team culture ( all the better if such an accomplishment can be demonstrated in New Zealand and  overseas).  In this respect Sonny Bill Williams is right about the need for a Maori and/or Pacifica  presence on the coaching staff. This would help to forge inter-cultural team cohesion and  give the haka a new gravitas against smirking opponents. Clearly, on these criteria, Jamie Joseph should be the next All Blacks coach, he has the mana and track record to do the job. However, if his coaching team is to rise above  the World  Cup semi -final loss to England they will need to be clear-eyed about the harsh realities of capitalism, professional rugby and intellectual property.