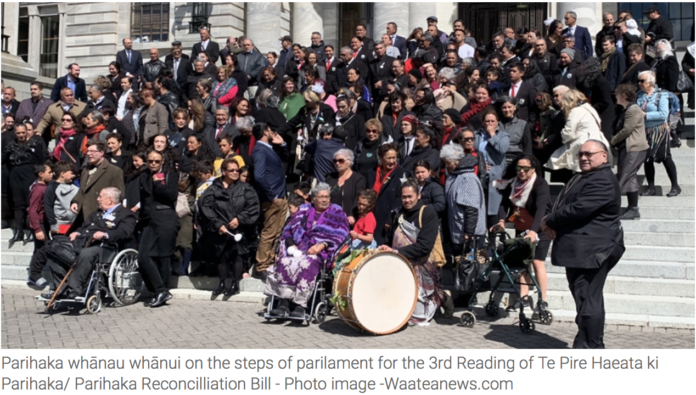 We must never allow the perfect to defeat the good, but the fact that it’s taken 138 years to formally apologise for the tragedy of Parihaka speaks volumes about the cultural denial of the negative effects of colonialism.

The secret to New Zealand’s economic success over its barely 200 year life has been the illegal seizure of indigenous lands and point blank refusal to hand them back or pay genuine compensation for their theft.

Māori lost 95% of their land in less than a century, the economic, cultural and political legacy of that level of theft is seen today in every negative social, education and health statistic we have.

Settling the Treaty is a Pakeha desire so that they can drop the pretense of solving that legacy, where as honouring the Treaty requires an engaged partnership and real understanding.

The Treaty settlement process to date has been a farce that has only succeeded in exacerbating and entrenching the injustice of the original confiscation, so what needs to happen now?

I am a big believer in the Treaty and a big believer in Constitution. If we are serious about righting the wrongs of our colonial past so that Māori have the same agency promised to them under the Treaty, we must consider political structural change with an Upper House created within Parliament that has 50-50 Pakeha and Māori representation.

This Upper House would consider law from the perspective of its Treaty obligations and reject legislation back down to the House of Representatives if that law didn’t reach that standard.

Tinkering and flawed processes have done nothing to bring justice in 138 years since Parihaka, that is what the Government should truly be apologising for.