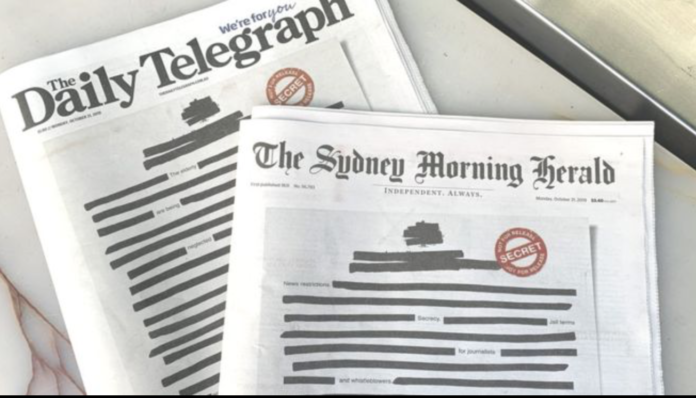 More years ago than I now care to remember I was the editor of CANTA, the Canterbury University Student Newspaper. One edition caused a problem because I and a couple of my reporters had done an investigation into aged care in Christchurch and found a couple of residential homes where the standards of hygiene and over -crowded conditions were frankly appalling.

CANTA was, at that time, printed by a private firm who refused to run the story because they believed it would leave them vulnerable to legal action by the home owners named in the article .

As the print deadline was just a couple of hours away I took the copy from the manager of the firm and with a black marker pen I blocked out every word in the story and told him to put the redacted version on the front page.

I also wrote an editorial about what had happened. The printer was not happy but he could not refute that I had wanted to publish a story and he had refused to publish it and so the printing presses rolled.

I have to admit then to a bit of a nostalgic smile when I read yesterday that two of Australia’s biggest newspaper rivals The Sydney Morning Herald and The Daily Telegraph had decided to black out their front pages in protest over national security laws which journalists say have stifled reporting and created a “culture of secrecy” in Australia.

The worry about press freedom in Australia began last June when police raided the Australian Broadcasting Corporation (ABC) and the home of a News Corp Australia journalist .

The raids it is claimed had been conducted over articles which had relied on leaks from whistle blowers,one of which had detailed allegations of war crimes while another had alleged an attempt by a government agency to spy on Australian citizens.

So good on these newspapers for their protest. Freedom of the press is vital to a healthy democracy and I applaud their actions.

My only comment would be to invite them ( and indeed all mainstream media) to take this moment to reflect on their own editorial policies. How often do they deny their readers the right to information because a story might offend one of their major advertisers or some other vested interest?