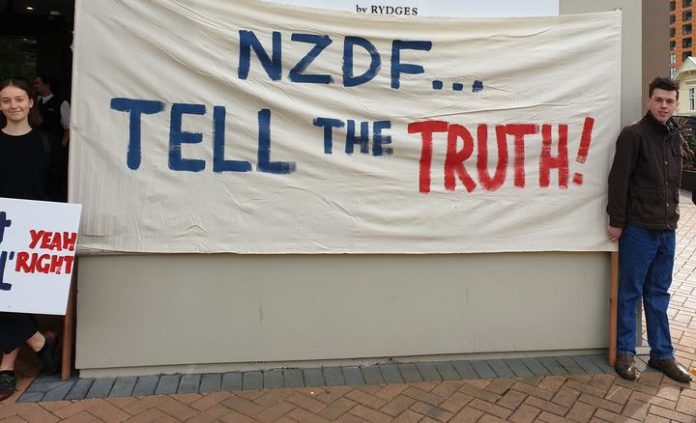 On Tuesday morning the Operation Burnham inquiry hearing resumed after it was suspended three weeks ago. The hearing is being held at Royal Society of New Zealand, 11 Turnbull St, Thorndon, Wellington on Tuesday, Wednesday and Friday.

The first witness is Jim Blackwell. He was the director of Special Operations at the time of the 2010 SAS raid is suspected of being instrumental locking away an important document. This withheld highly relevant information into the allegations of civilian deaths. He will be examined on Tuesday morning.

A group of protestors from the Hit and Run Inquiry campaign greeted Blackwell with placards that said “Jim Blackwell Tell the Truth” and “Lies upon Lies”. They also had a huge banner which read “NZDF: Spinning a web of lies”. The group of protestors were advocating that victims of the NZSAS 2010 war-crimes should no longer be dishonoured and disrespected by the cover-up that has ensued.

Spokesperson Sarah Atkinson said that “it’s about addressing the culture of cover-up within the NZDF”. She also said that “The NZDF are being caught in their own web of lies. It is only a matter of time before it unravels completely.”