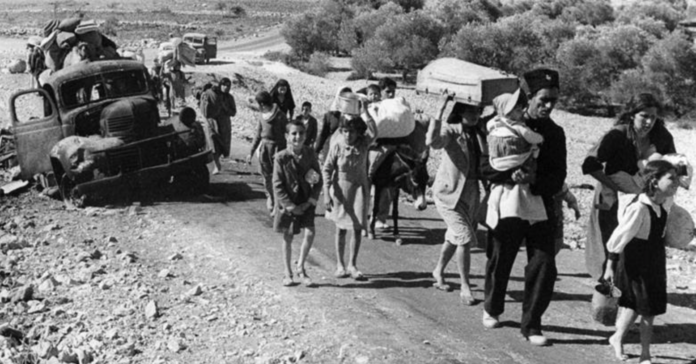 In a press release on 4 October 2019, the UNHCR’s Regional Representative in Canberra, Louise Aubin, welcomed New Zealand Prime Minister Jacinda Ardern‘s formal announcement of our refugee resettlement quota increase, noting that it “sends an important message to the world that every country can make a difference in sharing responsibility for the global refugee situation”. As the UNHCR acknowledges, the majority of refugees are confined in countries neighbouring their homelands.

In Lebanon, where over 470,000 Palestinians are registered with UNRWA, the refugees exist in conditions that UNRWA describes as “dire and characterised by overcrowding, poor housing conditions, unemployment, poverty and lack of access to justice.” Palestinian refugees have few rights; they are not allowed to work in as many as 39 professions, neither are they allowed to own property or land. The number of Palestinian refugees in Lebanon has swollen since the war in Syria forced out so many from that war-torn land.

There are, altogether, 12 refugee camps in Lebanon where, during the 1982 Israeli invasion, one of them, Shatila, and its adjacent neighbourhood, Sabra, were the scene of an Israeli Army-supervised atrocity in September 1982 that has gone down in history for its utter barbarity. The Israeli Defence Minister at the time was Ariel Sharon and, with the approval of his government, the Israeli military ordered its Lebanese Falangist allies to ‘clean out’ the Palestinian refugee camps. The whole operation was planned and supervised by the Israeli military which, having trained and armed the Falangists, commanded them during the massacre. The order to enter the camps came from the Israeli military, as did the order to leave and the Israeli Army surrounded the entrances so that escape would be impossible. During the night, Israeli forces illuminated the camps with flares, to make it easier for the Falangists to search, violate and kill. Many of the slaughtered 3,500 victims were women and children.

With regard to the global responsibility for refugees referred to by the UNHCR’s Regional Representative in her welcoming response to Jacinda Ardern, the plight of Palestinian refugees actually calls for urgent recognition of their Right of Return to their homeland. It is tragically overdue. On 3 October this year, South Africa’s ambassador to the UN, Jerry Matjila, criticised the UN for failing, since 1948, to implement any the 72 resolutions it has adopted concerning Palestine. In 1948, the UN General Assembly passed Resolution 194(III), affirming the rights of Palestinian refugees not only to return to their homes but also to obtain restitution and compensation. The Right of Return is universally-recognised in international refugee law, human rights law, the law of nationality and the law of state responsibility. Moreover, that right is also provided for in the Universal Declaration of Human Rights (Article 13).

UN Resolution 2535 recognises “that the problem of Palestine Arab refugees has arisen from the denial of their inalienable rights under the Charter of the United Nations and the Universal Declaration of Human Rights.” Other UN resolutions, including 393, 2452 and 3236, further recognise the Right of Return for Palestinians forcibly driven from their homeland by Israel in 1948 and 1967. In a recent debate with John Minto, David Cumin, a director of the Israel Institute of New Zealand, said of the “right of return” that “there is no such right in any international law.” Israel openly declare that the Right of Return of Palestinian refugees would undermine the Jewish character of Israel and the support of powerful allies is enabling Israel to continue to violate international human rights law.

In the same debate Cumin said that in 1929, the League of Nations had “laid the political foundation for the creation of the 22 modern Arab League States and the one and only modern Jewish State of Israel.” He then went on, seemingly to admit, “Yet no one openly questions the borders of any of those countries, except Israel.” That is true, Israel violates its own UN Partition Plan borders, as well as those of the Palestinian West Bank, including East Jerusalem. It militarily-occupies the Palestinian West Bank and moves its settlers onto the land in perpetuity. Israel has also seized, and claimed sovereignty over, the Syrian Golan Heights, again moving members of its population to settle there. Cumin probably, in fact, meant to convey that Israel is the only state whose borders are in question but the way it came out is closer to reality.

Also during the debate with John Minto, David Cumin used the term ‘indigenous‘ seven times in justification of Zionist territorial ambition. He even said that calling Jesus ‘a Palestinian‘ erased his Jewish identity. Jesus was indeed a Palestinian Jew and, for centuries, people of different religions had, in Palestine, made good neighbours. In his time, the Palestinian King Herod was appointed by the Romans as king of Judaea, Herod’s father was a convert to Judaism and both were of Arab origin. Yet, while Israel claims its legitimacy is derived through the United Nations, it every day shows contempt for both the UN and the indigenous Palestinian people. The Encyclopaedia Britannica notes that: “The violent birth of Israel led to a major displacement of the Arab population, who either were driven out by Zionist military forces before May 15, 1948, or by the Israeli army after that date or fled for fear of violence by these forces”.

On another level, the ideologically-inspired violence continues to this day – day after day – and by night! The malevolence is not only to be found in Israel’s occasionally news media-headlined air strikes on defenceless Gaza. It relentlessly expresses itself in heartless acts of population-control in areas under Zionist military Occupation.

Already this month (up to and including October 15), the Israeli Army has made 47 raids on West Bank towns and villages in order to conduct home invasions. Of these, 17 were carried out at night, two of them in UN refugee camp. Two homes were completely destroyed, some partially. Israeli Occupation settlers add to this misery by spray-painting racist-hate messages on the walls of Palestinian homes.

It is now the season of olive harvesting in Palestine, which is targeted by both the Israeli Army and settlers. Here are just two examples:

There have been 14 such attacks on West Bank agriculture so far, up to and including 15 October.

On 11 May 1949, the 207th plenary meeting of the UN General Assembly considered Israel’s application for admission to membership of the UN. The Israeli representative, Moshe Sharett, peaking to the assembly promised that, as a UN member state, Israel would adhere to certain principles, one of which would be “Support for all measures which strengthen peace, guarantee the rights of men and the equality of nations, and enhance the authority and effectiveness of the United Nations”.

NZ’s commitment and call upon Israel

Also addressing the Assembly, Sir Carl Bebendsen, representing New Zealand, said that, while his delegation would vote in favour of Israel’s admission to the United Nations, it would however, “expect from the Government of Israel the same respect for the decisions of the Organiation as that which devolved upon all Member States. In the existing case, the pertinent decisions were those concerning the repatriation of the Arab refugees and the establishment of an international regime in those areas of Jerusalem specified in resolution 194 (III) of the General Assembly.”

While there have been more than 135 reaffirmations at the UN of Resolution 194’s consistency with international law, Palestinian refugees still wait in vain for member states to rise to their duty and obligations.