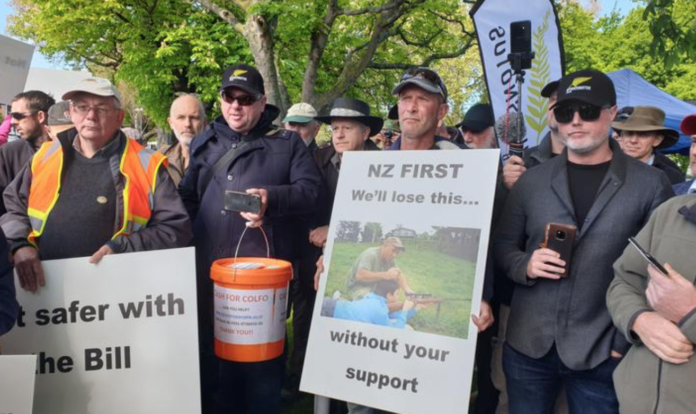 Gun nuts have the audacity to claim to NZ First that THEY are victims in the Christchurch terrorist atrocity!

They claimed to Winston outside the NZ First conference that they ‘feel’ like they are victims in the Christchurch atrocity because they’ve lost their sacred right to own machine guns.

I know, can you believe it?

All I could think while looking at their screwed up ruddy angry faces was ‘Who hurt you’?

COME ON! Such self victimisation is best suited for Massey University, not amongst the hunting and firearms community!

Dear pissed off gun nuts who are now all paranoid and rocking in the dark holding their guns whispering ‘my precious’, you are not the bloody victims of the Christchurch atrocity because the weapon of choice by that terrorist has now been banned.

Such a conflation of your sense of entitlement trying to trump genuine damage from an act of violent is beneath your mana.

Let me spell this out, we’ve all collectively decided that civilians don’t need machine guns, that means you have to hand back your machine guns. End of story, we aren’t going to budge on this, so sure let’s ensure the fine print is logical and reasonable and Police aren’t over stepping powers, but the machine guns go.

If you are reading this and wanting to chime in that these guns aren’t machine guns, if technical gun geek semantics is your defence, let’s just pop that in the backside right now.

Civilians don’t need to kill anything that fast.

I get it’s scary, you are all white males, we are totally used to getting our own way in almost every other dimension of our lives and when a weapon we invest so much of our sense of masculinity gets taken off us, it feels like a complex emotional cocktail of outraged tantrums mixed with fervent mass shooting justifications.

But time to pop the big boy pants on and acknowledge that civilians won’t own machine guns and that law abiding gun owners need to step up and win back public confidence in them, after all the terrorist had 3 complaints made against him and no one at his gun club picked up on that.

Why did that happen and are the law abiding gun own community stepping up to the plate to combat extremism?

These are questions and endeavours we would like to see from our law abiding gun community, telling Winston Peters that 250 000 gun owns are also the victims from the Christchurch terror attack makes us feel you are all being a tad disingenuous.

I grew up on a farm, a home kill block was over the fence from my room, I fully acknowledge a gun is a tool and the vast majority of gun owners are extremely careful and good with fire arm safety. I would also always stand up for farmers and hunters to have the right to own guns, but to attempt to ignore the reality of what happened in Christchurch is beneath us all.

Civilians don’t need machine guns. Christchurch showed us that in grim horror. There’s no going back on that.