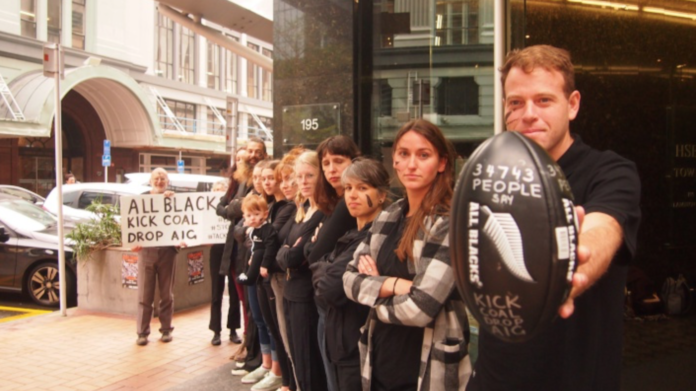 Climate change campaigners met with New Zealand Rugby today to deliver a 35,000 strong petition, calling for the All Blacks to drop its major global partner, insurance giant AIG. AIG is an insurer of the controversial Adani Carmichael coal mine in Australia.The campaign was launched by climate advocacy organisations 350 Aotearoa and SumOfUs on the eve of the Rugby World Cup.

“AIG is one of the last remaining companies willing to associate with the risky Adani coal project. By suspending its sponsorship with AIG, the All Blacks can show the world the kind of leadership they’re known for, and make Aotearoa proud both on and off the field,” said Finnie.

It is projected that the mine will produce 4.6 billion tonnes of CO2 over its lifetime, equivalent to 57 years of NZ annual emissions. To date 59 corporations, including banks such as ANZ and Westpac, have refused to support the Adani Carmichael coal mine. 16 other insurance companies have ruled out providing insurance for the project.

“Two weeks ago 170,000 New Zealanders joined the climate strikes to demand an end to all exploration and extraction of fossil fuels. It is no longer socially or morally acceptable to do business with fossil fuel projects. New Zealanders do not want our national rugby team associated with the mega Adani coal mine.”

The Adani mine is the most controversial mine in Australian history, with of Australians opposing it due to climate change implications and indigenous rights violations. If the mine goes ahead it would compromise the global commitment to curb emissions to meet the 1.5C target. In New Zealand, 79% of people feel that the climate crisis is important to them personally.

“This is not the first time New Zealand Rugby and social justice have crossed past. New Zealanders have a proud history of standing up for what is right in the face of injustice, by taking a stand against the Springbok tours in the 1970s and 80s. Climate change is the biggest human rights issue of our time. AIG needs to respect its commitment to the All Blacks and cut its ties with the Adani Carmichael coal mine.”

400 hectares of native land titles held by Traditional landowners, the Wang-gan & Jag-a-ling-goo people, were discounted by the Queensland Government in August to make way for the Adani Carmichael mine.

Finnie said “New Zealand Rugby gratefully accepted the petition and were receptive to hearing our concerns about their association with AIG.”