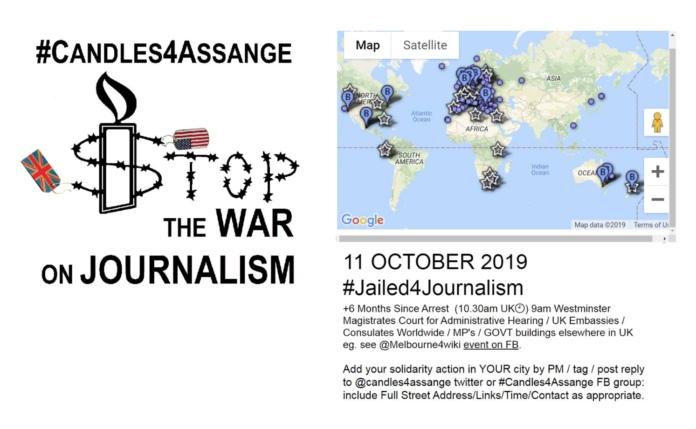 Free Assange NZ, supported by the Socialist Equality Group, is holding a protest in Wellington this Friday October 11 at 1pm, to demand freedom for Julian Assange.

Starting in Cuba Street, near Leftbank, at 1pm.
Walking to the UK High Commission at 2pm.

October 11 marks six months since Assange was illegally seized from the Ecuadorian Embassy in London. He has since been held in the maximum security Belmarsh Prison, where he is now awaiting rendition to the United States.

Assange is in prison because his organisation, WikiLeaks, published evidence of US war crimes committed in Iraq and Afghanistan, and details about US spying, bullying and other gangster-like behaviour throughout the world. If the Trump administration, supported by the Democrats, gets their hands on Assange, he will be jailed for life and potentially tortured for the “crime” of journalism.

Julian Assange’s health is deteriorating and his life is in danger.

Chelsea Manning, who leaked the evidence to WikiLeaks in 2010, has been imprisoned for more than six months in the US for refusing to give false evidence against Assange.

The New Zealand Labour-led government has maintained a shameful silence on Assange and Manning because of NZ’s alliance with the US war machine.

This protest is part of the worldwide campaign demanding freedom for Assange and Manning, and an end to censorship and the persecution of whistleblowers, journalists and anti-war activists.