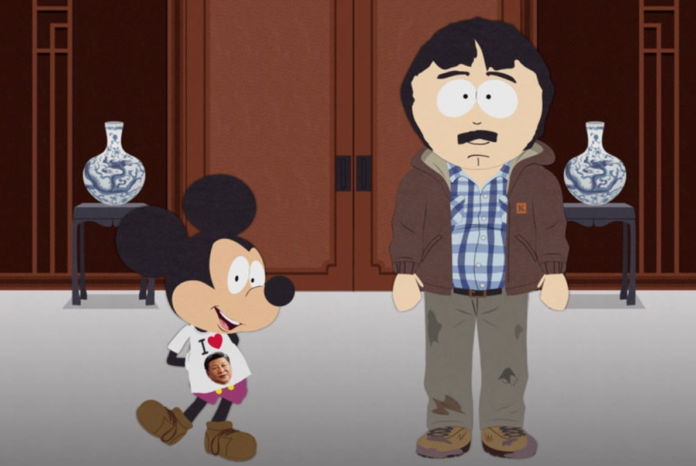 HONG KONG — “South Park,” the long-running Comedy Central cartoon whose mockery has spared few touchy topics, was erased from major platforms in China after an episode last week taunted Chinese censors and the far-reaching effect they often have on American entertainment.

The government’s censors, who routinely quash news and commentary deemed undesirable by the ruling Communist Party, wiped out video clips and discussions of the show, which premiered in 1997 and has lasted 23 seasons. Once known mostly for the raunchy humor coming from the mouths of its elementary-school-age main characters, the show has in recent seasons focused on political and cultural satire, without abandoning its boundary-pushing ways.

Last week’s episode, called “Band in China,” appeared to cross a new line for the Chinese authorities. On Baidu Tieba, a popular discussion platform, searches for “South Park” on Tuesday returned the following message: “According to the relevant law and regulation, this section is temporarily not open.”

Searches for the show were also fruitless on Youku, a video hosting service, which similarly cited “the relevant law and regulation.” On Weibo, the country’s most popular social network, posts mentioning the show could not be found.

BEIJING — An NBA fan event scheduled in Shanghai on Wednesday was canceled by Chinese sporting officials in the latest sign of China’s fury over the Houston Rockets general manager’s tweet in support of Hong Kong’s anti-government protesters.

The cancellation also came after NBA Commissioner Adam Silver defended the Rockets general manager Daryl Morey on Monday by saying players and team executives have the right to free speech.

“In view of the inappropriate remarks made by general manager Morey of the Houston Rockets of the NBA league and the improper remarks made by NBA commissioner Silver, the 2019 NBA fan night, which was scheduled to be held at Shanghai Oriental Sports Center at 18:00 on October 9, is canceled,” the Shanghai Sports Federation announced on the Chinese communication platform Weibo on Wednesday.

An ESPN host in Shanghai tweeted that a scheduled media event with players at the Shanghai event was also postponed, while NBA banners across the city were being removed.

The cancellation of the fan event follows the suspension of Chinese partners’ ties to the Rockets, with sponsors yanking money and Chinese television outlets saying they would no longer air the team’s games.

…meanwhile in NZ, the woke lynch mob of the perpetually outraged are demanding right wing voices be gagged at Auckland University,  a feminist event in Auckland has to be moved because of threats of protest, the same feminist event at Massey University is being threatened and a NZ book on free speech at Universities has been turned down because the content is too scary.

The Identity Politics Left believe micro aggressions create macro violence and that the policing of language is more important than free speech. My hope is that Andrew Little has enough sense to kick his review into hate speech past the 2020 election so as to not make this an election issue. Unfortunately the Greens (who want to champion the restriction of free speech) and their awful online protagonists simply don’t have the awareness of how counterproductive they would become in an election where free speech was a central issue.

The Wellington Twitteratti (most of whom are Green supporters) have secret Facebook Pages where they list those guilty of thought crimes against woke mantra, that type of vile neoMcCarthyism would be crippling in a national debate on free speech if exposed via screenshots.

The NZ Left SHOULD be the champions of free speech, because it is our speaking truth to the State that is most threatened when free speech is curtailed!

Last year when Southern & Molyneux were banned from speaking because they were denied a venue, the Identity Politics Left cheered, then barely a month later Chelsea Manning was being threatened with deplatforming by National. Those very same voices from the Identity Politics Left were awkwardly silent as the exact same arguments they had been using to shut down Southern & Molyneux were picked up by National in an attempt to silence one of the most important whistle blowers of the early 21st century.

The Left have more to fear from censorship than the Right do, and our self censorship because it might trigger someone is beneath our collective intelligence.

I watch so much of the virtue signalling bullshit we squabble over on social media as the planet burns and unjust economic models empower the 10% while crucifying the remaining 90% and fear our inability for solidarity will sink us, especially when we are so busy trying to censor everyone and prosecute every micro aggression we don’t agree with.

It really says something about us when bloody South Park are greater champions for free speech than the NZ Identity Politics Left.