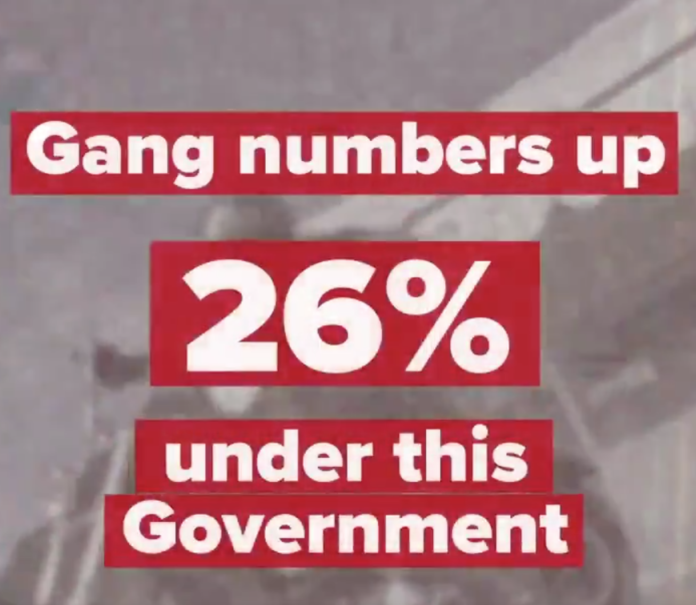 Cough, as TDB pointed out in our How Stuart Nash wins National the 2020 election blog.

Gang numbers are up.

Meth prices are down.

What the hell happened and when does this political time bomb go off?

Firstly, the gang numbers were rising under National. During it’s term, National moved the evidential threshold in the prosecution of living off the proceeds of crime from beyond reasonable doubt to balance of probabilities.

This legal change had an enormous impact on the drug economy.

You could argue that allowing the State to reduce the legal defences of the individual in this manner was exceptionally unjust and made for a one sided process, but because it was aimed at organised crime, no one cared.

But it had an unforeseen consequence.

Previously, growers of weed could structure their lives and financial arrangements through trusts and limited liability processes that insured that if they got raided, (combined with the difficulty to successfully prosecute growers under the proceeds of crime) they ultimately protected their investment.

That all changed the second the evidential thresholds moved. If you could lose everything for a plot of cannabis, then you may as well try and make as much money in as short a period of time as you can.

One weekend of making meth equals what it takes 3 months to grow for cannabis. The evidential change inadvertently pushed many previous growers into meth cooks, and was one of the reasons why the sudden drop in weed occurred a couple of years back and why it’s still dry at times.

We inadvertently upgraded an entire class of weed growers into meth cooks so the skill set to manufacture domestically exploded throughout the criminal world.

The single greatest factor of the huge increase in gangs were the 501s. Australia’s contempt for us as a nation leapt new scales when they introduced ‘character tests’ which saw any Australian born overseas open to being renditioned out of Australia to their birth country for any criminal offending.

Australian authorities would rendition these prisoners to Christmas Island as punishment until they agreed to being sent back to their birth country.

In many cases, the NZ born Australian criminals that were being forcibly removed to us had no whanau connections whatsoever in NZ because most had moved when they were children. One could argue that these young men were the product of an Australian upbringing so any criminal behaviour they committed is really on Australia, not us as the birth country, but such nuanced reasoning is simply not a factor in Australian domestic politics.

So we have endured an enormous and sudden influx of Australian criminals who are vastly more violent than the domestic variations.

This has led to a couple of years of violent expansion by the Australian gangs who have used a level of violence that far exceeds NZs gang violence to simply enforce their will and take territory. A spate of murders, drug stand overs and beatings have been the outcomes.

This has led to the local gangs expanding by recruiting via social media for more members while gaining their own domestic cooks to make the meth in NZ so that the domestic gangs have as much money and foot soldiers as the new Australian factions.

We are seeing a ratcheting up of forces in the wake of this private gang war.

The biggest dividing line between the Australian faction and the domestic gangs is their source of meth. The Australians link to incredibly dangerous South American cartels who are another factor up in terms of violence and ruthlessness. The product is a far higher quality.

Domestic gangs get the base meth ingredient, pseudoephedrine, shipped in via Triad links from China who then have the Biker gangs transport the ingredients to other domestic  gangs who have their own cooks that produce the product.

This over supply has led to the price drop we see now.

During it’s term, National upgraded  police surveillance powers to military level with the GCSB enabling and empowering Police with their 5 Eyes mass surveillance.

The problem when you give domestic police intelligence units that kind of military grade intelligence however is that the needs and interests of the spooks starts to over ride domestic interests.

By gaining an enormous insight into the connections to Chinese organised crime, the interest starts becoming of national intelligence value, not a domestic policing one.

We saw with the utter failure to anticipate white supremacy as a terror threat (despite one being on NZ soil planning an atrocity for 2 years) to see the ease with which top down values create blind spots.

Are these new police surveillance powers being used to actually prosecute organised crime gangs and move against them, or is the information of a higher national security value so all that’s happening is observation for intelligence purposes?

So when does this political time bomb go off?

The Australian Gangs have solidified their new supply lines and the domestic gangs are beefing up now with plans of retaliation. The new sources of meth have flooded NZ with a cheaper more pure product, so expect one hell of a violent Summer.

If a full blown gang war erupts on the streets of NZ, the freaked out urban populations who don’t see how huge the gangs are in provincial NZ are going to scream for protection and Simon Bridges will give them a tough Sheriff likely to exacerbate the problem rather than solve it.

What does the Government need to do?

We need some blue sky thinking to stop what’s coming.

I’m not sure we are capable of that.