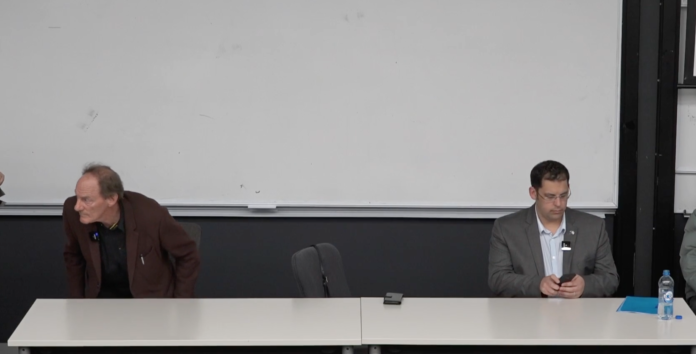 This was the Israel debate from earlier this week.

No rational person can ignore the horrific hatred Jews have had to endure over the centuries nor diminish the obscenity of the Holocaust BUT none of the historic hatred, nor the vile maliciousness of Nazi genocide excuses or justifies the terrible group punishment and brutal occupation of the Palestinian people, and that’s where the debate must always be.

The Israeli’s are the ones with all the power in this cruel occupation, they decide which Palestinians live or die and their misplaced militancy and paranoid defensiveness, while understandable in the context of a history of abuse, doesn’t in any way shape or form justify what Israel is doing to the Palestinians.

This debate was a celebration of free speech. It was angry, it was passionate and at times bitter, but we all had the benefit of actually hearing the arguments put forward. At a time when Massey University, Auckland University and the social media woke lynch mob are so hell bent on silencing debate and strangling off free speech, it was a reminder that we can still sit together and debate, because it is only when we talk this pain out that we can effect real change and avoid the violence that the lesser angels of our nature can drag us down to.

I wish to thank David and John for agreeing to debate and really hope that this is but the first of these types of dialogues, because if we strangle off free speech, the pain these issues generate only festers and turns and explodes.

Let us have the courage of our intellect and reason and talk these issues out rather than repress and deny them.