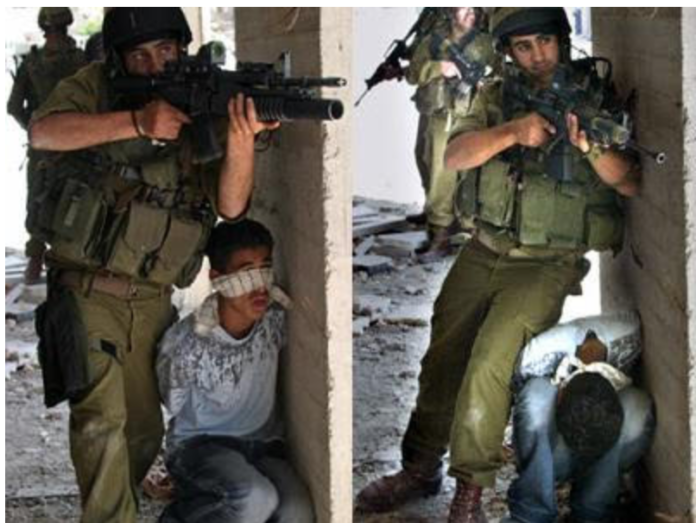 There were just four Palestinian Gaza ceasefire violations in September. Two of them were missile-launches across the Green Line that took place on 10 and 12 of last month. The other two, on 7 and 9 September, were Palestinian Resistance attacks on Israeli military targets, near the border at Rafah and east Khan Yunis.

Leading to the first Palestinian Resistance attack on the Israeli military, up to and including the seventh day of the month, Israel hit Gaza with eight air strikes. In addition, the Israeli Navy had opened fire on Palestinian fishing boats on seven occasions. Also over the same period, the Israeli Army opened fire on Gaza farmland on three occasions, making an incursion on one day and bulldozing crops. The day before the first Palestinian response, Israeli Army position behind the Green Line opened fire, with live ammunition, rubber-coated steel bullets, stun grenades and tear gas canisters, against March of Return protesters, killing two youngsters: Ali Sami Ali Al-Ashqar (17) in east Jabaliya and Khalid Abu Bakr Mohammad Sufiyan Al-Rab’i (14) in Gaza. Israeli Army attacks on protesters, up to and including 7 September, also left 76 people wounded, along with several tear gas casualties.

On 8 September, Israeli forces opened fire on two areas of Gaza farmland, as well as on Khan Yunis. There was no Palestinian response. On 9 September, the day when Palestinian Resistance forces did open fire on the military, the Israeli Army had made two incursions into Gaza, bulldozing farmland and twice opening fire on other agricultural areas. They also targeted Rafah City.

On the first day that Palestinian missiles were launched (10 September) there were nine Israeli air strikes in northern and central Gaza, the Israeli Navy twice opened fire on Palestinian fishing boats and the Israeli Army fired on the al-Bureij UN refugee camp, as well as farmland east of Gaza City.

On 11 September, before the last day of Palestinian missile-launchings for the month, Israel carried out another three air strikes, Israeli tanks twice shelled Beit Lahiya and Israeli forces, positioned behind the Green Line, opened fire on people near Khan Yunis.

For the remainder of September, there was no further Palestinian Resistance, other than by protesting. During these protests, Israeli snipers killed one person, Saher Awadallah Jir Othman (20), and wounded a further 201. Another protester, in Beit Hanoun, was injured by a missile fired from the Israeli Iron Dome system.

Palestinian fishing boats were subjected to 23 attacks by the Israeli Navy and the Israeli Army made eight Gaza incursions, laying waste to land and bulldozing crops.

Just as it has been doing for over 50 years, last month Israel continued its cruel military dictatorship over the people who dare to remain on land that it covets in the West Bank. The purpose is to humiliate and separate the helpless population and force them to leave. The methods Israel uses to this end are numerous, here are merely a few examples of those most exercised by Israel this September while carrying out 478 raids, 94 of which included home invasions:

The Israeli Occupation forces abducted 40 Palestinian minors in September; the youngest, Uday Jamal Abu Ali, was aged 11 and the average age of those abducted was 15. In every case, the names and identities of the young victims were recorded. Israeli soldiers raid Palestinian homes in the middle of the night and, ignoring distraught parents, awaken terrified children and take them, often shackled and blindfolded, away for interrogation.

On 24 September, Israeli soldiers, at the entrance to the al-Arrub UN refugee camp, abducted two children: Qutayba Imad Hassan Al-Ra’i (13) and Mahmoud Yusef Al-Madi (15). First, the soldiers assaulted the 15-year-old, causing him to lose consciousness, then they abducted him. Later, the same day, Israeli Army personnel abducted the 13-year-old, assaulting and injuring his mother when she tried to defend him. On 29 September, in Hebron, Israeli troops abducted 15-year-old Osama Issam Al-Rajabim, as he passed them on his way to school.

A major target of the Zionist Occupation is local agriculture because it not only exemplifies a vital component of Palestinian culture but also makes use of land which Israel would rather seize for its settlers. On 3 September, Israeli troops prevented farmers from harvesting almonds on Qaryut village farmland, despite them having earlier received permission from the Occupation military. The almond harvest lies close to the Occupation settlement outposts of Ayash Qadoush and Kayda. On 6 September, Israeli forces bulldozed Burin village farmland and built an Occupation settlement service road.

On 9 September, Israeli forces destroyed a barn in the Khilat Salama area, Hebron, near the Adora Israeli Occupation settlement. On 11 September, the Israeli Army destroyed solar electricity panels, as well as a water pipeline used to irrigate crops, in the al-Musafar area in east Yatta. On 12 September, Israeli soldiers invaded agricultural land in the Umm al-Kubish area of Tammun, uprooting 250 olive trees and destroying five agricultural irrigation tanks. They also uprooted 120 trees in a local nature reserve and destroyed the surrounding fence that protected it.

On 18 September, the Israeli Army uprooted 100 olive trees in the Khirbeit Quirkish district of Bruqin. On 21 September, Israeli troops forced a farmer, Abdel-Latif Hassan Arrar, to stop working his land in Kafr Thulth, Qalqiliya and seized his tractor. On 22 September, Israeli soldiers beat up and hospitalised a 70-year-old farmer, Samhan Shartih, near al-Mazra’a al-Gharbiya village, to stop him working his land. On 26 September, the Israeli Army seized, and held captive for four hours, a resident of Irtas village, Khalil Adel Mohammad Asad, as he was trying to harvest grapes. And so it went on; there were altogether 16 Israeli Occupation assaults on Palestinian agriculture in September.

When a foreign army of Occupation‘s soldiers seize property belonging to the civilian population, they are as always fully armed. On 2 September, Israeli troops robbed residents of five tents being used as livestock shelters, in the Ein Faris area, near Nahalin. On 8 September, a villager in Kafr Qaddum, Amjad Abdel-Mo’men Jum’a, had his bulldozer and truck seized by Israeli soldiers. On 18 September, Israeli soldiers stole a tractor belonging to farmers in the al-Ras al-Ahmar district, and soldiers manning a checkpoint at the Za’tara junction, robbed Mohammad Assad Mohammad Badad of US$15,000 in cash. There were several other seizures of property during the month of September.

Military Occupation is a contemptuous process that puts the interests of the invader above those of the invaded. Zionism’s view of the Occupied population as unworthy of consideration inevitably expresses itself in routine violence, not just on the part of the Israeli Army but also by settlers. Unsurprisingly, there will also be occasional acts of violent retaliation on the part of the victims.

There is no sanctuary, no security at home for Palestinian families in their West Bank and East Jerusalem homes. The Occupier intends it so. On the very first day of the month, Israeli forces, firing rubber-coated steel bullets, stun grenades and tear gas canisters, raided Zububa village and searched several homes. Four other home invasion raids took place, using the same amount violence. Two residents were wounded and several people were taken prisoner. There were, altogether, eight home invasion raids during the month, with dozens of homes violated by Israeli soldiers. September this year was a relatively quiet month for home invasions!

Zionist forces frequently take home invasions to an extreme by destroying Palestinian homes altogether. On 1 September, the Israeli Army forced a Silwan resident, Ma’moun Jalal, to destroy his own family home – or face having to pay the Army to carry out the demolition. The same happened to another family on 3 September. On 11 September, Israeli troops destroyed a mobile home as well as a tent dwelling in east Yatta. Altogether, nine homes were destroyed in September, with the Israeli Army ordering the destruction of two others.

The Israeli Occupation involves population control measures that include extortion, in the form of ‘fines’ and the imposition periods banning people from entering their homes or praying at their local mosque. On 5 September, the Israeli Occupation issued an order, banning seven al-Eisawiya villagers from entering their homes for one week and extorted 5,500 NIS (US$1416) from each of them, as the price of their release from captivity. On 14 September, Israeli forces detained a bulldozer operator, Ammar Mohammad Abu Ziyat, to stop him building a road near Qarawat Bani Hassan and extorted 4,000 NIS (US$1,030) for working inside what the Israeli Army claimed, was a ‘restricted’ nature reserve. On 20 September, the Israeli military forced several workers to stop installing a water supply network in the Bariya area of Teqoa and banned four residents, Ali Bader, Mohammed Nasser Mahmoud, Basil Mohammed and Sufian al-Issawi, from their homes in al-Eisawiya village for nine days, as a condition of their release from captivity.

Illegal Israeli Occupation settlements not only form a barrier to peace and reconciliation but also impose upon the Palestinians a harrowing and menacing presence of fanatical, racist neighbours. Palestinian motorists and pedestrians are constantly endangered by gangs of stone-throwing settlers. On 20 September, a stone-throwing gang of Israeli settlers inflicted head injuries on a Palestinian refugee, Mohammad Mahmoud Ibrahim Daraghma, near Burqa village. This month, there were five such incidents.

Palestinian land is under constant threat from settlers. On 2 September, Israeli settler militants invaded and occupied land in the al-Makhrour area of Beit Jala and installed a mobile home and a power generator, fencing off the area and preparing more land for mobile homes to occupy. On 14 September, Israeli settler militants raided east al-Sawahra and installed several mobile homes, water tanks and construction equipment, for the establishment of a settlement outpost and attempted land seizure.

Armed settler terrorism is another fact of life the Palestinian people have to endure. On 3 September, an armed Israeli motorist opened fire on stallholders at a fruit and vegetable market, near the Bizzariya village road junction. The same day armed Israeli settlers raided a Bedouin community in Shalal al-Oja and assaulted people. Two, who tried to defend themselves, were taken prisoner by the Israeli Army. On 20 September, armed Israeli settlers, escorted by the Israeli Army, raided Beit Ummar.

The silence here is chilling. Even in Britain, where the Zionist Lobby has such power to terrorise the people’s freedom of speech, the UK Government is hammered by Members of in Parliament in both Houses, Commons and Lords, with questions about its failure to bring Israel to account. It is shameful that our lawmakers should need reminding about their duty to defend human rights and international law. Demand answers, question their silence and let them know we’ll give them no peace. Israel’s inhumanities enjoy the support of our ‘traditional allies’, it‘s time to break free and set, rather then follow, example!