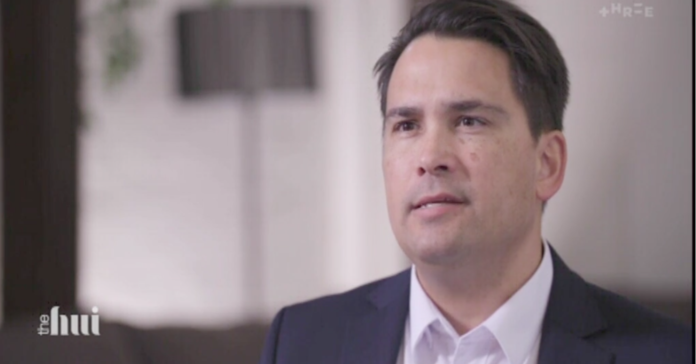 Simon Bridges says he would have raised climate change with Donald Trump – even though he doesn’t think it’s an emergency.

Prime Minister Jacinda Ardern went to New York for the UN Climate Action Summit, where she met with world leaders including the US President. But the focus for her meeting with Trump was trade, not climate change.

Appearing on The Hui on Sunday, Bridges revealed what he would have said if he had that platform.

“I would have raised it with Donald Trump,” he told host Mihingarangi Forbes.

…what a load of cobblers!

Simon minimises the climate crisis so why on earth would he bring something up that he doesn’t care about? There’s more chance of Donald Trump declaring a desire to wed MSNBC’s Rachel Maddow than Simon arguing climate change with him!

Based on Simon’s dribbling acquiescence to China when he talked to their state TV politburo,  I have a great deal of difficulty imagining any scenario in which Simon wouldn’t get down on his knees and ask how he may please his host.

I mean, actually cheerleading China while they harvest body organs from dissidents, impose the most strict mass surveillance Orwellian dystopia on the planet and have internment camps for 1 million Muslims they are ‘re-educating’ takes a special kind of devotion doesn’t it?

To praise China suggests a flaccidness of values not even 5 tonnes of Viagra cures.

But this ridiculous claim that he would have stood up to Trump in light of a recent past history that suggests nothing but unoffencive servitude was only the least most ridiculous  answer he gave in this excellent Hui interview.

Mihi Forbes, who is easily one of the country’s best broadcasters, demolishes Bridges on the issue of how unjust full and final settlement theory is when he uses Jim Bolger as a defence for the status quo until Mihi points out Bolger is also critical of it.

I suspect Bridges was expecting a far less critical interview and wasn’t prepped for it because his answer becomes a train wreck.

Simon’s basis for full and final is that the white majority passionately cherishes the idea that NZ was founded on stealing indigenous land and only paying 2% of the value of that theft back. Simon argues that if settler nation NZ ever had to pay anything more than 2% for all that land confiscation, well, the very social fabric of our nation would be torn down.

Which on reflection, doesn’t sound like a bad thing at all.

Simon attempts to insinuate that land theft is more a difference of opinion than social injustice until Mihi points out clearly that it isn’t.

The full and final fantasy is just that, a fantasy. Paying a pittance in compensation for stolen land compounds the injustice, it doesn’t heal it. The Treaty is not to be ‘settled’ it is to be ‘honoured’, that’s the difference and the next generation refuse to accept what their grandparents were forced to accept.

I’m not suggesting a sudden land grab by Māori demanding back large tracks of private property, I’m calling for a re-evaluation of previous Treaty settlements for Crown owned land because surely after this awakening the very least we should do is shame the Crown into paying real compensation and not lip service.

Also let’s remember the specific case of Ihumatao isn’t ‘mum and dad’ private land, it was bought by Fletchers as part of Auckland’s greedy property speculation so returning that land to public ownership as a National Park or local housing for mana whenua won’t suddenly trigger all the laws of Adam Smith’s Capitalism to explode at once.

Simon was trying to dog whistle in this interview but Mihi made him swallow it.