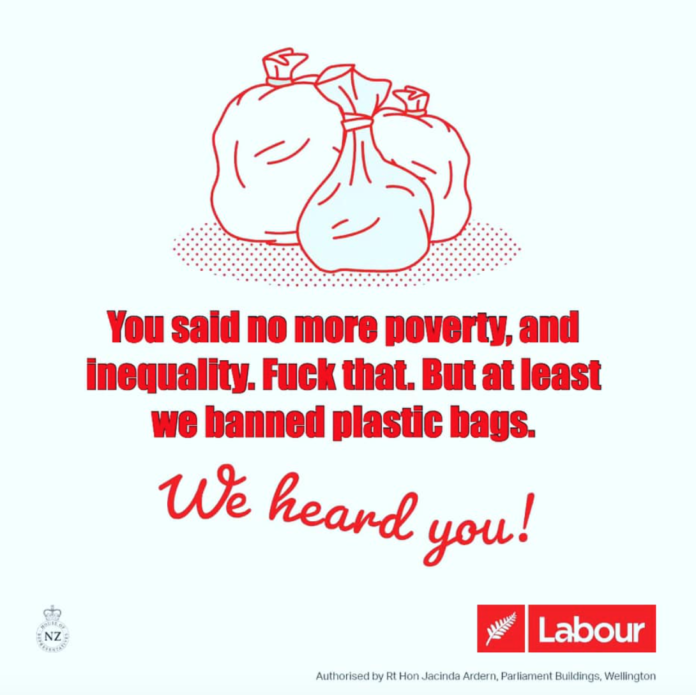 This Government has utterly failed beneficiaries. They queue outside WINZ at 2am in the rain desperately trying to get an AAAP advocate to force the spiteful WINZ workers to give them what they are legally allowed in terms of welfare, women are given less food as part of a cost saving measure and the draconian drug testing measures National imposed are still in place.

Mothers kept single by Government rules about relationships for beneficiaries

Hannah McGowan: My disease is not my fault, so why am I being punished?

Benefit suspensions drop after new policy
The number of people whose benefits are suspended or cancelled each day has dropped by more than a fifth in just a matter of weeks, the Social Development Minister Carmel Sepuloni says.

…holding up a pitiful 20% reduction on a policy of needless cruelty is nothing to celebrate.

“We are 20% less spiteful than National” is hardly a rallying call is it?

Beneficiaries are frightened by the toxic staff and toxic culture of WINZ, a toxic culture that the Minister herself accepted exists but is now embarrassed to acknowledge now she is Minister.

One is left to conclude by the Minister’s failure to change the damaged toxic culture of WINZ that her own personal history of her mothers benefit fraud has painted her into a corner where she must over compensate by siding with MSD rather than challenge them.

Jacinda has also been shamefully pitiful on this issue.

I’m sure most beneficiaries would be more than happy to swim through shark infested pools and walk over broken glass to just see a WINZ staff member who wasn’t looking to catch them out to denigrate and shame their vulnerability. Look at the latest survey…

The survey, conducted by the Child Poverty Action Group (CPAG) and ActionStation, questioned 267 people on their perspectives, insights and experiences of the welfare system.

The findings included an overwhelming trend of people having negative experiences with WINZ and a desperate lack of income to afford basic needs.

One of the key findings was that 84 per cent of people said they did not currently receive enough income to live with dignity and participate fully in the community.

The simple naked truth is that beneficiaries don’t have enough to live on and if punishing them for that is ‘the politics of kindness’, I think the Prime Minister requires a dictionary.

Why does Labour think these beneficiaries who flocked to vote for Jacinda in 2017 will do it again in 2020 when their lives have stagnated and not progressed?