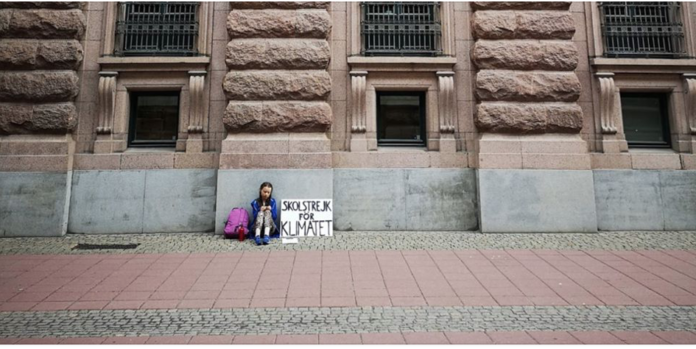 On Monday August 20, 2018 Greta Thunberg decided to break the law – for climate change. She was supposed to start school again after a long summer break. But instead of rejoining her classmates, the ninth-grader seated herself against the stone facade of the Swedish Parliament’s main building in central Stockholm.

The spot was well chosen, as many politicians, professionals and ordinary people pass by daily. Next to her, she placed a sign that read “School Strike for the Climate”.

In front of her , held down by a small stone, was a pile of leaflets on which her intentions were clearly stated.

“We kids most often don’t do what you tell us to do. We do as you do. And since you grown-ups don’t give a shit about my future, I won’t either. My name is Greta and I’m in ninth grade. And I refuse school for the climate until the Swedish general election.

In Sweden, going to school is compulsory so Greta was breaking the law.

“I’m too young to vote” she told a reporter “but Swedish law requires I go to school. So I do this to make my voice heard and attract media attention to the climate crisis”.

That was just over a year ago.

This week we have seen millions of people around the world taking up Greta’s demand that politicians listen to the climate scientists and take immediate and dramatic action to reduce global warming.

This Friday September 27th you have the opportunity to support this now global movement. Young or old you can go on strike this Friday for Climate Change.

Everyone of us can make a difference,

Here is where you can find where events will be taking place be near you. Just click on the link.