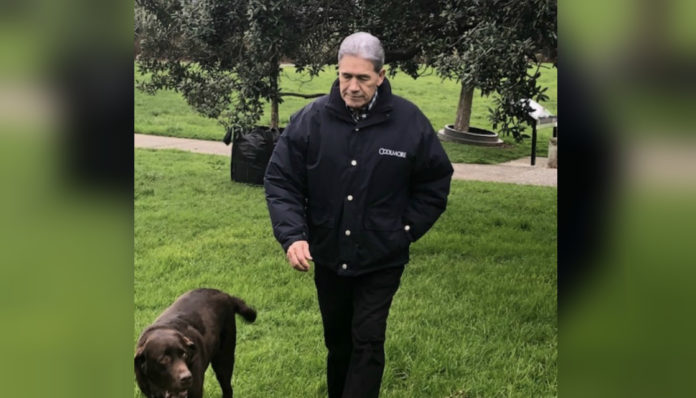 I see New Zealand First has put out a press statement which seeks to condemn Simon Bridges for his recent positive interview with Chinese media, doubling down on recent criticism aired in Parliament by Winston. To quote NZF’s release:

Mr Bridges praised the Communist Party of China (CCP) for taking the country from mass poverty to economic prosperity in the state media interview, calling it an “amazing story”.

Mr Peters said the interview was “staggering” because he “belongs to a country that for all these decades and down through the years… has been a democracy”. ”

Now, it’s not that I disagree with Winston Peters on this issue. Quite the contrary!

It’s just that I kinda feel that Winston might have been better to apply the same sort of sentiment to his own remarks afore making them back in 2017, when he made his first major speech as Foreign Affairs Minister, to the PRC-backed Confucius Institute at Victoria University:

“”We should also remember this when we are making judgements about China – about freedom and their laws: that when you have hundreds of millions of people to be re-employed and relocated with the change of your economic structure, you have some massive, huge problems.

“Sometimes the West and commentators in the West should have a little more regard to that and the economic outcome for those people, rather than constantly harping on about the romance of ‘freedom’, or as famous singer Janis Joplin once sang in her song: ‘freedom is just another word for nothing else to lose’.

“In some ways the Chinese have a lot to teach us about uplifting everyone’s economic futures in their plans.””

Now, to be fair and to be sure, Winston’s 2017 speech *did* also include the following – “New Zealand and China do not always see eye-to-eye on every issue … but where we do have a different perspective we raise this in a way that is cordial, constructive, and hopefully clear.” And, again to his credit, he at the very least was speaking about the PRC and”the Chinese” rather than the Chinese Communist Party – which may be something of a fig-leaf when speaking about a one-party state, but it’s a fig-leaf that *does* at least somewhat matter.

It’s also the case that Bridges was in a foreign country as a guest, and apparently reckons that his interview was edited to remove anything *less* than glowingly positive from the record. Which is not exactly an excuse, but does provide some measure of contextual explanation for how and why he spoke – or seemed to speak – as he did.

Whereas Winston was speaking in his own country (which, to be sure, while it may give one additional license, does not mean one suddenly chooses to insult guests) and chose to add the overtly pro-PRC (and anti- too-much concern about human rights or freedom) segment I’ve quoted above to the officially prepared text of his speech for additional emphasis.

But having looked at the remarks Winston is – again, quite rightly – castigating from Bridges, and comparing these against his own speech (plus the off-the-cuff additions such as the longer section of excerpt I’ve quoted above, which wasn’t in the original text he was to deliver) … I would perhaps suggest that it is somewhat “Orwellian” for Winston to get *too* enthusiastic in his condemnation of Brides – at least without *first* issuing some form of clarification about how his, and therefore New Zealand’s position on the PRC has presumably now changed, evolved, and grown since that time. Assuming that it has.

And by “Orwellian”, I do not mean in the more usual sense nor literary associations of the term – to 1984 and the forcible historical amnesia of rewriting the past for political purposes.

I instead mean the rather memorable line from Animal Farm: